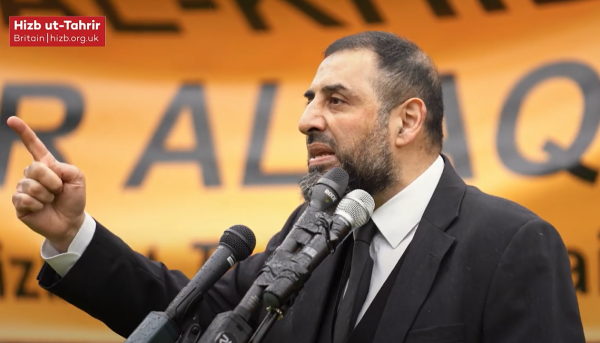 On May 16th during the height of the recent conflict between Israel and Hamas, Islamist group Hizb ut-Tahrir held a rally in East London called “ Act for Al-Aqsa” that attracted several hundred activists. At the same time a larger number of activists demonstrated under the banner of Hizb ut Tahrir in Birmingham.

Hizb ut Tahrir have been around for years their primary objective is to set up worldwide the Khalifate, a monolithic Islamic state guided by an unforgiving version of Shariah law. They have been around for years, once upon a time specialising in targeting university campuses for their rabble rousing before they got kicked off campus. But they never disappeared completely.

The recent war drew them back on to the streets in large numbers. The gathering at Altab Ali park, near Aldage East tube station, was attended by a few hundred people and lasted two hours. The message was always the same, expressed by the stage-managed chants that punctuated the meeting, along with the myriad “Allahu Akhbar” and “Takbir” calls:  “Muslim rulers, they shake hands, with Zionists who steal our lands!” , “Muslim armies where are you? Al-Aqsa is calling you!”, “Make Jihad in Allah’s name”.

The Hizb ut Tahrir “solution” is for total war, as the compere to the event made clear when he shouted:

This call to arms, coaxed in religious terms was taken up by many of the speakers. Taha Ibrahim directly addressed “the Muslim yoof” and urged them to “liberate Al-Aqsa” by Jihad and to become “a master amongst the martyrs.”

“O Muslim youth Ache for al Aqsa, obsess for al Aqsa and work obsessively for the establishment of the Khilafa” pic.twitter.com/VpZ6bSEscU

He spoke glowingly of the first Islamic State set up in Medina. This was in a bygone age but there was an implicit hint for the youth of today to emulate the military achievements of the founder of Islam in dealing with the Zionists. Except that there were no Zionists at the Battle of Badr.

Other speakers harped on the same theme. These included Yahya Nisbet, Taji Mustapha and Dr Abdul Wahid, long-time leader of Hizb ut-Tahrir in the UK. The latter went to great pains to express the central position of the Al-Aqsa mosque in the deen of Islam. Another favourite theme were the Muslim leaders in the region “cowardly” propping up and supporting Israel.

Hizb ut-Tahrir have been on the radar of the police and the government off and on over the years. They were somewhat eclipsed as a threat  by the more publicity hungry and violent al Muhajiroun and then by Islamic State.

They differ from ISIS and others in that their plan is to take over the armies of Muslim countries and then use them to destroy Israel. They do not officially call for their members to attack anyone. The concern here at Harry’s Place is that they take their members up to the edge and then tell them to be content with praying for this to happen. We are concerned that once radicalised up to a point it is inevitable that some people won’t be content simply with “making dua” as the Hizb ut Tahrir leaders advocate and will go on to conduct an attack of their own.

Owing to this ideologcal difference Hizb ut Tahrir are the last ones standing who openly call for jihad.

The Israel-Gaza flare-up gave them the opportunity to rear their ugly head again. The authorities should take note.