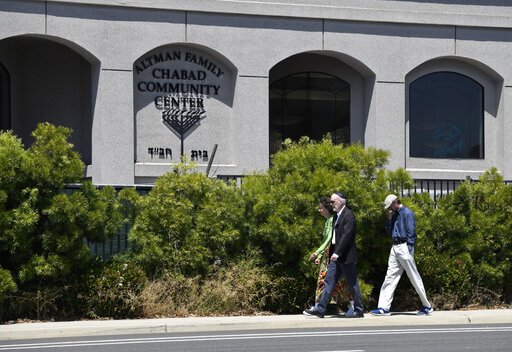 Six months to the day after the Tree of Life Synagogue massacre in Pittsburgh, this happened:

A 19-year-old gunman opened fire at the Chabad of Poway synagogue in Poway, Calif., on Saturday morning, leaving one dead and three injured, according to authorities.

One of the victims, a woman, “succumbed to their wounds,” Vaus said. The three others — a girl and two men — remain in the hospital with non-life-threatening injuries. All three were in stable condition, authorities said.

“I can only tell you that we have a fatality,” Vaus told MSNBC, “and I can also tell you that it was a hate crime, and that will not stand.”

The shooter, identified as John Earnest, posted a lengthy white nationalist and antisemitic manifesto, parts of which you can read here.

Earnest said in his manifesto that he was inspired by the Tree of Life gunman along with the New Zealand mosque shooter, who killed 50 people in Christchurch on March 15, 2019.
…..
Earnest claims he set a fire at an Escondido mosque in the weeks after the Christchurch shooting. In his manifesto, Earnest wrote, “I scorched a mosque in Escondido with gasoline a week after Brenton Tarrant’s sacrifice and they never found shit on me (I didn’t realize sandn*ggers were sleeping inside though—they woke up and put out the fire pretty much immediately after I drove away which was unfortunate. Also they didn’t report the message I spray-painted on the parking lot. I wrote ‘For Brenton Tarrant -t. /pol/’).”

Whether or not some Jews or Muslims want to acknowledge it, many people hate us equally and want us both dead.

(On Tuesday, a driver in Sunnyvale, California, ran down several pedestrians, leaving one girl critically injured. Police say he was deliberately targeting people he thought were Muslims.)

In his manifesto, John Earnest wrote a “lightning round” with questions and answers. The first question he answered was whether he is a Trump supporter. He wrote, “You mean that Zionist, Jew-loving, anti-White, traitorous c*cksucker? Don’t make me laugh.”

The Pittsburgh shooting suspect had posted on Gab about why he didn’t support Trump, saying that he was not anti-Semitic enough for him.

For some reason, this doesn’t make me feel any better about Trump– especially after he doubled down on his claim that there were “very fine people” on both sides in Charlottesville for the “Unite the Right” rally featuring hundreds of people marching with torches and chanting “Jews will not replace us.”

I am a proud Jewish-American who has served this country in the armed forces. I have put up with anti-Jewish crap my entire life, but the current turn to murder, assault and hate speech against Jews, Muslims, Hispanics lays at the door of our so-called president. Praising the virtues of neo-Nazis, white nationalists, and treasonous members of the old Confederacy encourages the violence and general ugliness our country is experiencing. The sooner Trump is gone the sooner we may emerge from our current national nightmare.

Trump spoke to the media before traveling to Wisconsin for a political rally.

“My deepest sympathies go to the people that were affected, the families, the loved ones,” Trump said. “Obviously, it looks right now, based on my last conversations, looks like a hate crime. Hard to believe.”

Hard to believe? Why?