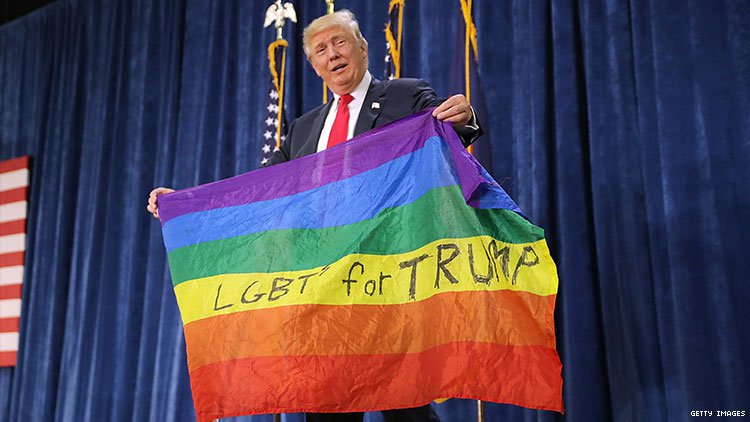 Just when you think you have seen peak ‘Trump Derangement Syndrome’ a new display of insanity cries ‘look at me’ as it does its mad dance through the media. This new peak takes the form of (formerly) respected LGBT magazine, Out – which has served its community for almost three decades – publishing an article calling the push for universal decriminalisation of homosexuality ‘racist’.

Can there be a more unedifying display? A gay writer for a gay magazine being willing to see other gay people put to death in other parts of the world because (a) the initiative to support decriminalisation was launched by President Donald Trump, and (b) they have some weird intersectional hang-up with the West putting pressure on barbaric countries who murder and oppress their own citizens on the basis of gender and sexuality. How else can you explain this breathtaking declaration:

“Trump’s Plan to Decriminalize Homosexuality Is an Old Racist Tactic”

You’ve heard of “pinkwashing” – that is the crazy idea that Israel only embraced gay rights to make the Palestinians look bad. Now we have “pinkbashing” in which it is suggested that the cause of gay rights is wielded as a blunt instrument to beat enemies of the West (as if beating The Wet’s enemies is, in and of itself, a bad thing).

The Out columnist explains:

There are several signs that this decision is denoted in a colonial sense of paternalism rather than any true altruism. According to the report, the decriminalization campaign is set to begin in Berlin where LGBTQ+ activists from across Europe will meet to hatch a plan that is “mostly concentrated in the Middle East, Africa, and the Caribbean.”

That sentence alone should set off several alarm bells. First of all, the Middle East, Africa, and the Caribbean are huge geopolitical entities. Attitudes toward gay people differ greatly among countries and regions within those entities and attempting to gather a room of European activists on how to deal with queer issues in those regions is the definition of paternalism.

Gosh! Could the simpler explanation simply be that the criminalisation of homosexuality is principly concentrated in these regions? Apart from these countries and pockets of Eastern Europe, most of the world is on a liberalising trajectory, and throughout most of the West, gay equality has been essentially achieved.

Is it not also ironic that these Left-wing useful idiots don’t seem to mind encouraging ‘paternalistic’ pressure being applied on Israel, or Middle Eastern countries perceived to be US-allies, like Saudi Arabia? Then ‘paternalism’ is just fine. Have you ever heard anyone on the Left, or a Liberal, complaining about international pressure on South Africa to end its racial policies in the 1980s? No. But apparently putting pressure on an African or Middle Eastern country to not arrest, imprison and execute gay people is a Right-wing project to driven by racism.

This reaction is not surprising. The Left has traditionally cried ‘racism’ when gay people attempt to assert their rights against a background of violent homophobia committed by black or Muslim people, even though the victims are almost entirely gay-black and gay-Muslim people. Who can forget the counter attack against Peter Tatchell by former London Mayor Ken Livingstone when Tatchell criticised for his decision to embrace Islamist cleric Yusuf al-Qaradawi, or the op-eds in the press when gay groups opposed murderously violent lyrics by Jamaican singers like Buju Banton, all insinuating a racist motive?

But this is next-level madness: opposing an initiative aimed at ending the criminalisation, imprisonment and execution of gay people sponsored by the Office of the President of the United States, simply because that president is Donald Trump, and the countries in the spotlight are the Idiot Left’s imaginary allies against “Imperialism”, is a shameful new low.