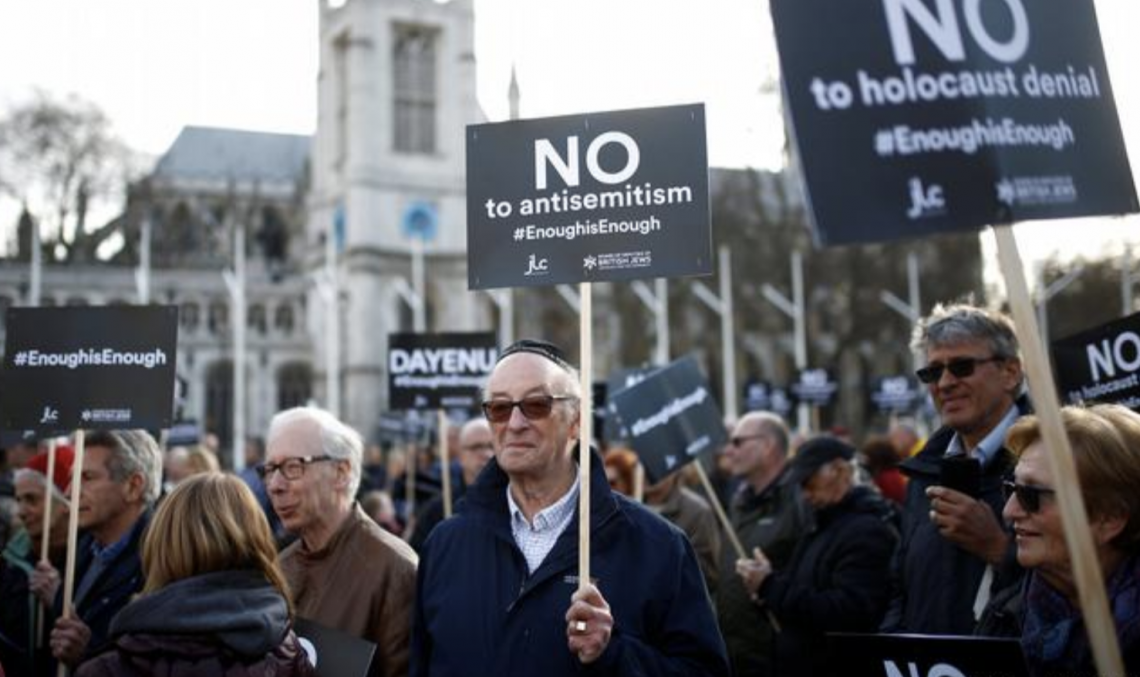 On September 5th 2018, the Jewish Chronicle published an article stating that 40% of British Jews would consider leaving the UK if Jeremy Corbyn became Prime Minister. Immediately, Corbynistas (which is, by the way, a hilarious name for an aggressively racist hate-mob) decried the poll and Jewish people themselves as ‘hysterical’.

The sad fact is Jewish people are not hysterical. If you understand one thing about Jewish history it’s that antisemitism, known as the oldest hatred, has been blighting the lives of Jews since time began. It may be that no harm (and please note that ‘harm’ does not necessarily mean another Holocaust) will befall the Jewish people if Corbyn comes to power but based on the historical experience of the Jews, and Corbyn’s own personal history of antisemitism, it is not unreasonable for Jews to be nervous. Jews, better than most people, understand the consequences of not getting out while you still can.

Jeremy Corbyn has immersed himself in a movement which is anti-Semitic. The hard-left has espoused antisemitism (disguised as anti-Israel sentiment) since before the Cold War. They use the same anti-Semitic tropes such as a Jewish conspiracy (utilised by many groups including Corbyn supporters) to demonise Jews and Israel. Corbyn has also aligned himself with organisations and people who have murdered Jews or who seek to murder Jews. He also, now quite famously, accused a British Zionist of not really being British despite having lived here for ‘a long time’. This is a specific form of British antisemitism where Jews are tolerated but never quite accepted.

Even if you were to argue that Corbyn himself isn’t an anti-Semite (and I would strongly disagree) you cannot disagree that he has aligned himself with those who are – and yes in this case you can be guilty by association. He has repeatedly refused to deal with it in his party. He also refuses to speak out against his followers who attack Jews and their allies on Twitter and in the party. Quite frankly, he doesn’t give British Jews much hope that he would suddenly change his tune if he were ever to become the most powerful man in the country.

It is clear that something has changed internationally and antisemitism which existed before, constantly simmering under the surface has now once again bubbled over. Even someone like me who engages with the subject of antisemitism for a living has been shocked by the aggressive vitriol being poured on Jews in 2018.

In the 2018 FBI Report on Hate Crimes, Jews, despite making up just 2% of the US population accounted for 58% of the victims of religiously motivated hate crimes and in the Gilets Jaunes riots in Paris antisemitic rhetoric was rife with Macron being described as the ‘whore of the Jews’. In Germany, protestors were seen to be chanting ‘Adolf Hitler’ and giving the Hitler Salute, along while flying the Palestinian flag.

In a 2014 article titled Is It Time for the Jews to Leave Europe? by Jeffery Goldberg, he wrote, ‘the Shoah served for a while as a sort of inoculation against the return of overt Jew-hatred—but the effects of the inoculation, it is becoming clear, are wearing off.’ Goldberg’s assessments were correct and despite the power that Corbyn may hold if he is ever to become Prime Minster, the reality is though, he is as much a symptom of a greater problem exhibited in the left, than he is the cause of this recent bubbling over of antisemitism in British life.

Corbyn’s supporters and people who align themselves with the progressive left see the world through the very specific lens of anti-imperialism, and they have decided (ironically, in a paternalistic and therefore imperialist way) who is classed as oppressor and oppressed and they have decided quite conclusively that Israel, and all Jews who support it, are white oppressors.

David Hirsh, one of the most important voices in the fight against left wing antisemitism stated, ‘For some, antizionism, anti-Americanism, anti-imperialism and antisemitism close in on each other; they share the same resonances, the same feelings, the same enemies, the same images and the same discourses.”

Jews are antisemitically framed as white colonisers who have stolen land from the indigenous Palestinians and represent the very worst of white Western imperialism. This is patently abused as the Jews are indigenous to the Middle East and are even more closely related to the Palestinians than they are to non-Jewish Europeans. Incidentally, they don’t understand that their aggressive Jew-hatred consistently proves the need for a sovereign Jewish state. Left wing obsessive anti-Imperialism means that in the battle to defeat Imperialism, Jews and Zionists are fair game. We have seen this up and down the country where Jews have been silenced and even forced out of organisations for vocally supporting Israel. In Birmingham in 2014 protestors stormed a Tesco’s and threw Kosher food on the floor and attacked police. They ‘justified’ this violently anti-Semitic behaviour as a protest against goods that were produced in Israel (they argue, again antisemitically, for a boycott of Israel), ignoring the fact that Kosher food is produced in many places other than Israel.

We also see this manifestation of antisemitism in the erasure of Jews from the anti-racist movement (something that leaves Jews vulnerable to attacks). Leftist progressives seem to be unable to understand that Jews, though many pass as white, are not white and do not fit into their myopic world view. After the Massacre in Pittsburgh in the Tree of Life Synagogue on October 27th, the Black Lives Matter official twitter account couldn’t even mention Jews or antisemitism in their condemnation of this crime. So the question is, if people who claim to be anti-racist do not stand up for Jews, then who does?

We condemn the violent acts of terrorism and hate this week. Though it can be hard to stay the course, we must and we will. We will never stop fighting to end white supremacy forever. #TreeofLife #Pittsburghshooting #BlackLivesMatter

Perhaps though, you think that British Jews should have faith that even if Corbyn and his supporters are let loose that the British people would defend them? Despite there being some wonderful non-Jewish allies who have taken it upon themselves to fight alongside Jewish people, they do seem to be relatively small in number. In an ComRes poll conducted on the 3rd  December 2018, 39% of those polled indicated they would vote for Labour with its current leadership. This gives some Jewish Brits no comfort. Even if non-Jewish British people missed the first accusations of antisemitism in the Labour Party in 2015, this summer was quite a different story. It would have been impossible to miss this summer’s avalanche of evidence cascading from the feet of Jeremy Corbyn and the Labour Party. So what does this tell British Jews? It tells them that those who say they would still vote for Labour are either anti-Semites themselves or they are apologists for an antisemite.

Whether you still have faith in Britain and her people is up to you, but dismissing the very real fears of a minority community that numbers just 250,000 is cruel at best and antisemitic at worst. On the 14th of December, Lord Alan Sugar appeared on Good Morning Britain and stated that he would leave the UK if Jeremy Corbyn became Prime Minister. It is well known that Lord Sugar is Jewish and in response Owen Jones tweeted, ‘Celebrate good times, come on!’. For many British Jews they are trying to cope with the collective trauma of 2000 years of the most intense persecution in history whilst trying to process how a country they were once proud to call home could suddenly feel so hostile and unwelcoming.

If 40% of a protected minority would leave the country if the leader of HM Opposition becomes Prime Minister then perhaps they are not hysterical, just maybe they have seen the the writing on the wall and they’re afraid of what it says.