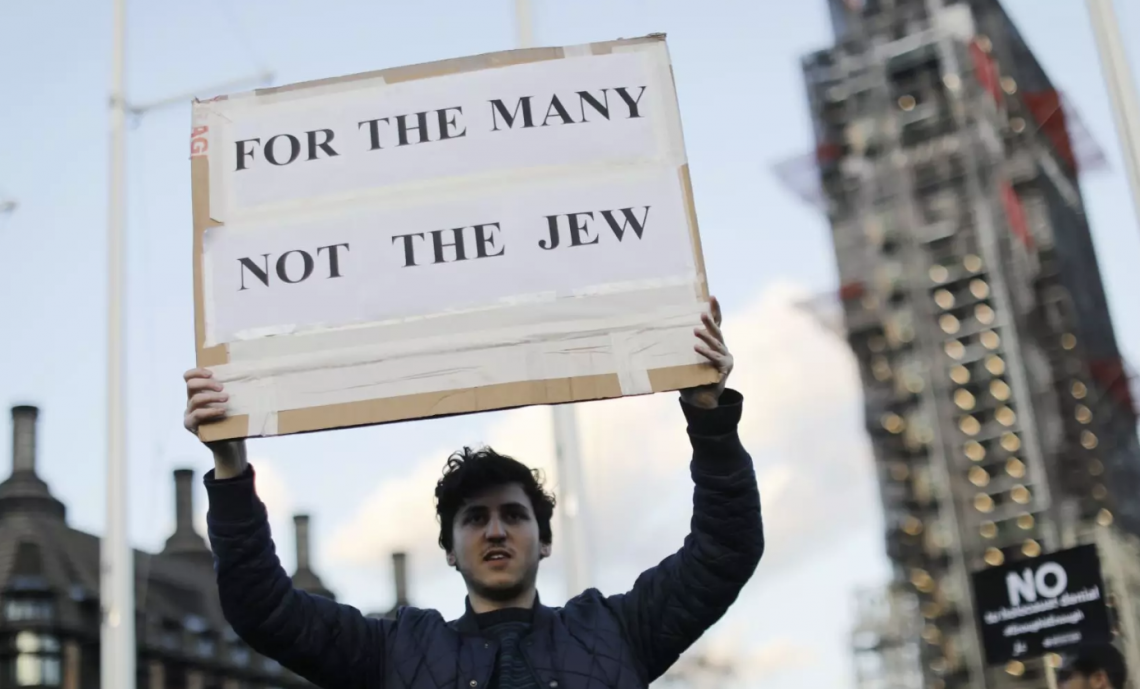 This is an account by Steve Cooke, Secretary of the Norton West branch as well as political education officer for Stockton North CLP and a member of its executive committee of what happened. The account is taken from his Facebook profile where he has made it publicly available:

I am aghast to report that an emergency motion on the #PittsburghSynagogue attack which I took to my Labour Party branch meeting last night was voted down, with the leader of Stockton-on-Tees Borough Council and the cabinet member for community safety among its most vociferous opponents.

The three Norton (North, South and West) branches hold a joint monthly meeting, with the option to break out into separate groups should a branch-level vote be required on motions. I am secretary of the Norton West branch as well as political education officer for Stockton North CLPand a member of its executive committee.

I imagined that the emergency motion I had drafted to condemn the Pittsburgh murders, criticise antisemitic hate speech and present the Labour Party as leading the way in opposing such prejudices would be approved without controversy.

I had received positive feedback when I shared the draft motion on social media earlier in the day and a number of Labour comrades asked me if they could use it in their own branches and CLPs. I also sent the motion to my trade union branch executive colleagues with a view to Unite the union’s Teesside Local Government branch bringing it to Stockton North CLP later in the month and all of those colleagues confirmed their support for the motion.

The Norton Labour joint branches meeting was poorly attended on the night, but we had a decent discussion about the Labour Party’s policy on fracking and various other local issues.

When we got to the emergency motion, however, it was soon apparent that there would be resistance to the whole idea with the chair of the meeting, Cllr Steve Nelson, the cabinet member for community safety, the most implacably opposed.

Arguments made against the motion included that it should say we were against all racism not just antisemitism. I pointed out that the motion clearly expressed concern about “racist hate crime more generally”, criticised governments and opportunist politicians for the “scapegoating of minorities”, cited Tell Mama UK, the Islamophobia monitoring organisation, and it affirmed our commitment to “fighting racism in all its forms”.

It was said that all the focus was on “antisemitism this, antisemitism that”, while other types of racism never even got a mention. I pointed out that I had presented a motion about Islamophobia and anti-migrant racism to the CLP in July and then our women’s officer Barbara Campbell and myself had organised a counterprotest against a far-right group (mainly members of Anne Marie Waters’ For Britain party) that marched in Stockton town centre later that month.

They wanted references to antisemitism removed from the Pittsburgh motion, but no demands had been made to make the aforementioned Islamophobia and anti-migrant racism motion more generic or to erase all mention of those specific types of racism when it was debated and then unanimously supported at July’s CLP meeting.

Comrade Nelson said that the person alleged to be responsible for the Pittsburgh murders was a far-right activist, a Nazi, which was the very opposite of what the Labour Party stood for. Yes, I responded, that’s why the motion condemns what he did, describes his long held antisemitic views and states the party’s opposition to such bigotry. I said that I would be happy to add “far-right, neo-Nazi activities” to the motion’s clause noting that “the alleged perpetrator of this heinous act is reported to have had a long history of antisemitic views and held a deep hatred for Jewish people”, but the comrades weren’t prepared to accept that proposal either.

The comrade accused me of trying to bring the party into disrepute by associating us with antisemitism. It felt dreadful to be accused of this simply for proposing a motion that, in fact, would have strongly disassociated us from any form of hatred towards Jewish people and which would have shown how clear we were about confronting the evil of antisemitism.

I cited, without divulging names, a number of cases where I had challenged Labour members who posted vile articles and memes on social media that promoted Holocaust denial and blamed Jews for causing most wars and various other problems. I pointed out that some of the culprits had been members in neighbouring constituencies and said I had also intervened privately to advise more local comrades that content they had shared online could have been interpreted as antisemitic.

Comrade Nelson insisted that such people should be expelled, we should have zero tolerance for them, but Barbara Campbell and I argued that the Labour Party’s efforts to address racism should not be confined to dealing with expulsion-level offences. We didn’t only care about prejudice when it was severe; we wanted members to understand the particular characteristics of antisemitism and feel empowered to challenge it. Changing minds, not expelling people, should be our priority.

Steve Nelson said that the whole Labour antisemitism issue was “just a game being played” and that my motion and call for political education on the topic was part of that. “Who’s playing the game then?”, comrade Campbell and I asked, “Tell us.” But he wouldn’t say.

The women’s officer, Barbara Campbell (declaration of interest: Barbara is my partner), had to intervene to ask comrade Nelson to stop attacking me and return to chairing the meeting. It was disappointing that Cllr Robert Cook, the leader of the council, said nothing to support us or protect me from personal attacks. (In the end he too voted against the motion.)

Comrade Campbell said that she as an equalities officer supported the motion because the type of training election candidates received on equality and diversity tended to emphasise legal issues and statutory requirements rather than the political dimension or the history, which was particularly relevant to understanding antisemitism.

“Are you seriously going to vote down a motion condemning the Pittsburgh killings?”, I asked, “Is this for real?”

“Yes, I am”, replied comrade Nelson whilst physically pushing away the sheet of paper with the motion on it.

I moved that the motion be approved. No amendments were proposed. A vote of the entire meeting (i.e. all three branches together) was held and only Barbara Campbell and I supported the motion. That vote lost, I asked for a vote of the Norton West members but that was tied and the motion fell.

There was further discussion after the vote as comrade Campbell attempted to find a compromise, but no concessions were offered.

I am anxious about going public with this, despite my belief in open debate and transparency, because at its meeting on 19 October another member of the CLP executive committee had threatened to make a formal complaint against me if word got out that the EC had voted down antisemitism training. However, I feel that the person making that threat was the one in the wrong and that such bullying behaviour should not be given further licence in the party.

For the record, I would like to make it clear that Alex Cunningham MPplayed no part in these meetings and I believe that he has always taken a consistent position in opposing antisemitism and all other forms of racial prejudice.

I would add that the conflict over this issue does not follow the left-versus-right stereotypes presented in the media. Barbara Campbell and myself are easily the most leftwing members active in our branch (I was a member of Left Unity prior to joining Labour in 2016 and we’re both People’s Assembly activists) and we supported the motion. It was the longer-established, Corbyn-sceptic members who opposed the motion. The same pattern was followed a fortnight earlier when the CLP executive voted by eight votes to six against allowing me to organise political education on this topic. The pro-Corbyn left members mostly supported the proposal and the more ‘centrist’ establishment, mainly councillors, voted against.

The full text of the emergency motion on the Pittsburgh synagogue attack is available at http://bit.ly/pittsburghmotion