The Palestine Solidarity Campaign held an Apartheid Conference on Saturday.

One of the speakers was Rebecca Vilkomerson from Jewish Voice for Peace. 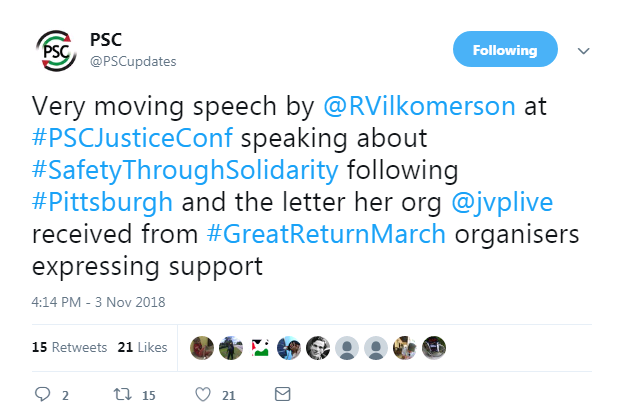 Wait…a letter from the organisers of what?

Indeed it’s true because if you want to reach out to Jews in the wake of a terror attack against them the first people you’re going to approach is a fringe organisation that spends its existence attacking…Jews. Or at least that’s what makes sense to do if you’re Hamas.

The letter can be seen on JVP’s Facebook page and is reproduced below.

On behalf of the organizers of the Great Palestinian March of Return in Gaza, I would like to express to you and all Jews in America our profound sympathy and solidarity in the face of the recent tragic massacre at the Tree of Life Synagogue in Pittsburgh.

Palestinians in Gaza share with American Jews the fear and pain that comes from racist actions.

In America Jews were targeted because they are Jews. In Palestine, we are cooped up in the tiny space of Gaza, and not allowed to return, because we are NOT Jews.

We thank you for your many years of courageous support of the human rights of Palestinians.

We wish to share with you that we stand in support of equality and human rights of Jews in America and around the world.

Reading this reminded me of 2014 when Hamas murdered 24 of their own citizens in Gaza and led me to wonder (once again) how it’s possible for anyone who believes in human rights and freedom to support them.

Here’s what MEMRI found on the issue of who’s organising the Great Return March:

An examination of statements coming out of Gaza about the “Great Return March” campaign, by Hamas officials, by campaign organizers, and by participants and supporters of the campaign, reveal that it was not  merely a popular civilian campaign but was fully supported by Hamas, and that its goal was to breach the border fence in order to penetrate Israeli territory and march on Israeli communities. Since it began, on Land Day (March 30, 2018), Hamas officials have paid visits to the camps along the border where the marchers congregate, to express their support and encouragement. Hamas officials noted that movement members had participated in the marches and that they comprised the majority of fatalities. Mahmoud Al-Zahhar even emphasized that the march was not a form of peaceful resistance.

Wilkomerson is shocked in the wake of the Pittsburgh killings and goes on the attack…against Jews: 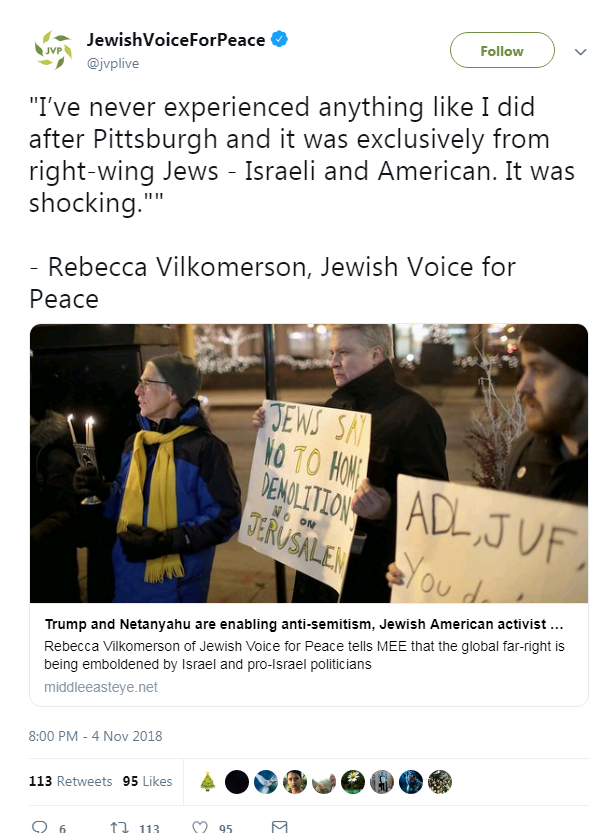 But what is it about the Palestine Solidarity Campaign that they can’t organise anything without talking about Jews? 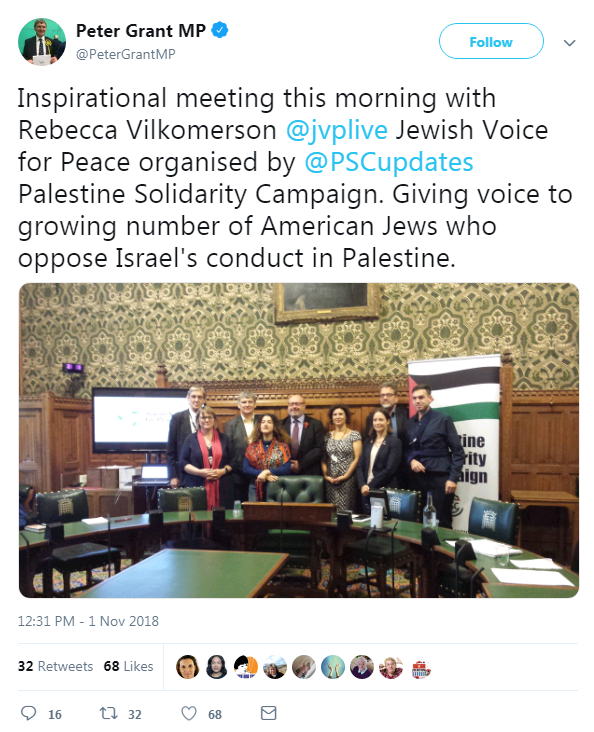 Ben Jamal the head of the Palestine Solidarity Campaign supposedly said the following on Saturday:

So how is it that Tapash Abu Shaim is still listed as a director of the PSC after sharing antisemitic conspiracy theories and tropes?

This coming from a man who refuses to punish @tapashabushaim, a director of @PSCupdates when he got caught out sharing antisemitic conspiracy theories on social media. You’re the last person to lecture anyone about racism https://t.co/fSAr3SVn5N