After a thoughtful contribution by Owen Jones and an excellent interview with Mark Regev the Andrew Marr show turned to guest Diane Abbott. Typically, she repeatedly asserted her deep commitment to fighting antisemitism – and repeatedly refused to engage with actual concrete examples of antisemitism on the left.

‘You know yourself a number of Labour Party members, some of them in your immediate family. Have they turned into antisemites overnight?

She then accused Andrew Marr of smearing ordinary Labour Party members for simply raising the possibility that the LP might have a problem with antisemitism. When he countered that if there was no problem, why was an inquiry being set up to deal with the issue, she answered that the problem was simply one of ‘process’. She then, by way of further deflection, insisted that antisemitism was a problem everywhere.

Andrew Marr quite rightly pressed her on the relationship between some sections of the left and antisemitism. To illustrate this point he showed her a cartoon depicting Menachem Begin as a Nazi officer. This appeared in the Labour Herald, a publication edited by Ken Livingstone in the 1980s. Abbott simply refused to engage with this question, and responded, irrelevantly, that she had joined the Labour Party because it was full of good people fighting racism. 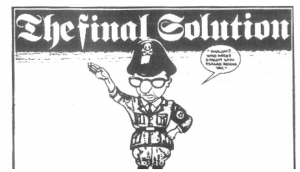 At the beginning and end of the interview she invoked the security concerns of the Jewish community in her constituency. This reflects a common pattern when dealing with antisemitism – only its most serious and extreme manifestations are truly acknowledged. It is apparently outrageous to suggest that someone just might be antisemitic unless they demonstrate a personal, conscious, hatred of (all) Jews. For other forms of prejudice the bar is set much lower, and there is discussion of ‘implicit racism’ and other more subtle manifestations of a problem. And someone accused of sexism isn’t assumed to personally loathe all women.

One of Abbott’s most disgraceful deflections was prompted by a question about Corbyn’s cosy tea with Raed Salah.

‘Its all too easy to take remarks out of context.’

Again, there’s a real double standard here I think. Salah’s views are comparable with the most vile extremes on the spectrum of any form of bigotry. Would evidence of hobnobbing with an out and out racist of any other type be brushed aside in this away?

However there’s one point on which – to take her own remark out of context – I’m in full agreement with Diane Abbott.

“It’s not fair on ordinary Labour Party members who must be shocked.”

Alec adds: Indeed it is too easy to take remarks out of context. That said, it does look as if television critic Euan Ferguson of the Observer and Arthur Dent were suggested Adolf was a Zionist. No, the other Adolf.

Dunno if it were before he went mad.

In recognition of the 70th anniversary of Auschwitz:

Eichmann was, I mention, an avowed Zionist: his solution of choice would have been an entirely new land, outside Europe, for all Jews: it was only after 1942, and Wannsee, and after he’d relinquished his deluded fantasy of transporting all Jews to Madagascar, that he was given responsibility for otherwise expediting matters.

“Exactly!” says Freeman. “It had got to the point where: hmm, that’s not working, they’re not leaving quickly enough, ha, let’s think of something else. But to my mind there are not enough things that show the Nazis as human, as smart people, charismatic people, who are not inhuman naturally. But who are able to be fantastically inhuman when they choose to be.”

What a pair of fumpdumbles.