The government will now require anti-Muslim attacks to be recorded separately by all police forces – up till now practice has been inconsistent between regions.

This seems sensible – I asked my MP to sign this EDM on the issue back in 2013.

Not surprisingly Tell MAMA, who have long pressed for a regularisation of the way anti-Muslim incidents are recorded, welcomed the announcement:

[T]he proposals from the Prime Minister will add to a collective effort to try and tackle anti-Muslim hatred at a national level. Muslim communities should welcome this decision since it will have far reaching and wider positive implications in the future around tackling anti-Muslim hatred.

However some were suspicious of the move.  Most of these were complaining that the government should focus its attentions on Muslim perpetrators of crime rather than Muslim victims. But Tahir Alam, former Chair of Park View Educational Trust, was also sceptical. 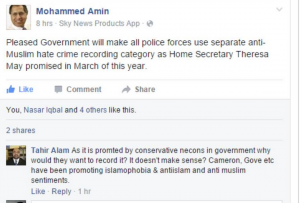 A rather more worrying response came from a researcher at MEND.  This is the organisation whose Chief Executive, Sufyan Gulam Ismail, lashed out at Tell MAMA because of its links with the CST and liberal outlook:

We don’t want the Government to fob us off with some phony thing called Tell MAMA, which has got a made pro-Zionist pretty much heading it or in a very senior capacity and is making all sorts of comments we might not agree with when it comes to homosexuality, to be recording Islamophobia.

The reaction of MEND’s Amar Alam to the government’s step on recording crime – well spotted by Harry Matz –  is very telling.

Update: Harry has now replaced his own screenshot of Amar Alam’s post with a statement from Alam which I reproduce below:

However, the problem arises when people use their hatred of Islam to commit hate crimes against Muslims and this is what I meant when I said we must outlaw Islamophobia in the UK. Malicious hatred against any religion should be condemned and that includes Islam.

What is unfortunate is that an innocent status celebrating news by the government was misconstrued and publicised as something malicious.

What I found most disappointing is that my personal status was used to suggest it was a view shared by MEND. My views are my own and I post on my wall with the intention that they reflect my own personal views and nobody else’s. 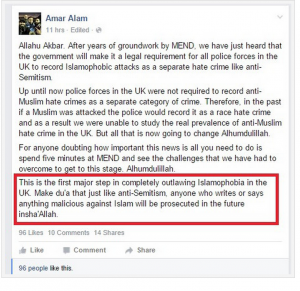 Tahir Alam seems incapable of distinguishing between opposition to Islamism and anti-Muslim bigotry. Amar Alam makes a similar conflation between anti-Muslim crime and criticism of Islam.  It will only make it more difficult to tackle anti-Muslim bigotry and violence if these quite separate issues are not kept clearly distinct.

Update: Here’s the latest on MEND, and a very useful reminder of their form to date – Manchester Student Union is apparently prepared to host an exhibition from MEND, but is not willing to offer a platform to Julie Bindel or Milo Yiannopoulos. [Some factual inaccuracies in this post have been pointed out – see for example this tweet from Chris Moos.]