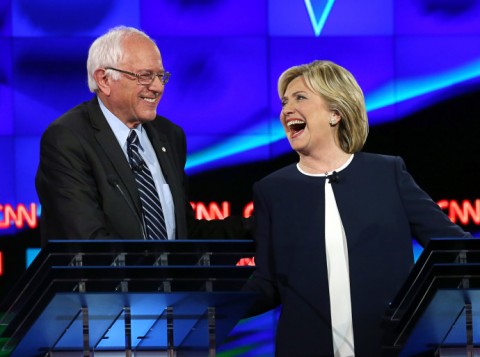 Sanders’s candidacy marks the first time in about a century that an advocate of democratic socialism has achieved such a prominent place in the national political debate. That’s a good thing. (The last socialist candidate for president to achieve a mass following in the US was Eugene V. Debs, for whom I was named. Next time you’re in Terre Haute, Indiana, you can visit his home, as I have.)

There is something parched about American political debate—something resistant to the imagination and maybe to the moral sense, which renders us incapable of dealing with obvious problems of American society. The parched quality has a name. It is the prejudice against the word “socialism.” The word is declared taboo. Conservatives and communists agree in saying that socialism is the same as communism. But socialism is not the same. If only we would allow ourselves to speak of socialism, in Bernie’s version of it, we would discover that it is permissible to glance at what the European social democrats or even the Canadian conservatives have done over the decades. We would discover that we, too, can enact social and economic programs designed to bring about large and democratic transformations. And here was Bernie at the debate to make these arguments, explicitly and implicitly, and it is wonderful, even if the commentators are still puzzling over the left-wing vocabulary.

Most important, Sanders has forced Clinton (somewhat against her will) to deal with the issues of vast wealth and income inequality, the excesses of Wall Street and big banks, trade agreements that don’t sufficiently protect American workers and the disproportionate power and influence of the very rich.

As I have previously noted, Bernie Sanders is not the American equivalent of Jeremy Corbyn.

Bernie voted in favor of American participation in the Kosovo War, which was a humanitarian intervention; and he voted in favor of the invasion of Afghanistan, in order to retaliate against Bin Laden. Here is a leftist who understands that American power can be turned to noble purposes and who understands, too, that America has an obligation to defend herself. At the debate, the question of Israel did not come up, but it is worth mentioning that Bernie’s leftism is not anti-Zionist, either—another point on which he differs from Corbyn, the friend of Hamas and Hezbollah.

Nonetheless Sanders non-interventionist tendencies are stronger than Hillary Clinton’s, and he is clearly less comfortable than Clinton in dealing with foreign policy issues. His opposition to a no-fly zone in Syria, and Clinton’s support, is a decisive difference for me.

At the debate he came out against any attempt by the United States to impose a no-fly zone in Syria, on the ground that American military efforts might bump up against the Russians. But, as Hillary observed, American planes are already flying over Syria as part of a military campaign. His remarks about Putin were the low point of his debate performance. He said that Putin will regret intervening in Syria, though I do not see why, unless the United States does something to make him regret. Bernie said that Putin already regrets intervening in Crimea and Ukraine. I do not know what Bernie is talking about. Everything has gone Putin’s way, and the Russian public is cheering.

And finally I agree with Berman about whom I will be supporting for the Democratic nomination for president:

All in all, I will be voting for Hillary. I admire her precisely because of her combination of wonkishness and cagey political strategizing. But I like Bernie. I am glad he is playing his role, glad that he is speaking of democratic socialism and its ethical and internationalist and programmatic aspects, glad that he is providing, at least rhetorically, the missing element in American politics. I am glad that he defended Hillary on the emails, and, if Hillary is elected president and Bernie ends up raising his stentorian and magnificently accented voice against her from the left, I will be glad about that, too.