This is a guest post by Arieh Miller, ZF Executive Director

Have you seen the photo of Jeremy Corbyn in front of the Hezbollah flag? You know, that one.  Jezzer is standing in the foreground, arms crossed, with a look of – well, a look on his face. And just behind him, taking up most of the background, is the distinct green-on-yellow flag of Hezbollah, carried by a chap who may or may not be just passing by.

You can google it if you like – ‘Jeremy Hezbollah flag’ will do the trick. I can wait. Found it? Ok then.

I have to describe it because the photographer who took it is being very particular about who does or doesn’t get to use it. Namely, anyone in the media who might use it to “smear” Jeremy, by suggesting that it somehow links him to the fascist organisation.

Speaking to the Independent, Samuel Hardy, the photographer in question, described how he was approached by Corbyn’s office. They essentially wanted him to “disappear” the photo, concerned it was painting their man in a poor light. Luckily for them, Hardy was also a Corbyn supporter – and agreed with their viewpoint.

Hardy even suggested that this was a principled standpoint. An Israeli paper, no less, had contacted him, asking him to “name a price” to be able to use the image. Imagine! An Israeli paper, of all media outlets, wanting to show Corbyn – that well known anti-racist and pacifist – posing in front of a Hezbollah flag, just to make him out to be some kind of extremist.

“It doesn’t take a genius to work out that they were aiming to take my photo out of context and use it to slander Jeremy.”

And from the Independent:

“It’s wrong on so many levels, knowing that your photo is going to be used to describe something that really wasn’t there.”

As the owner of the photograph, Sam Hardy obviously has the right to decide who does or doesn’t get to use the photo. (For the sake of full disclosure, I should add that Hardy contacted the ZF after we tweeted the photo without attribution or permission, and we agreed to pay his charge.)

But – and I say this with all due respect to him – the argument that the image is being taken “out of context” is complete and utter nonsense.

Yes, it’s true that the gentleman is passing behind him. Yes, it’s true that Jeremy might not have been aware of him when he posed. But he is absolutely culpable – because he chose to speak at the event where it was nigh-on inevitable that these flags would appear.

What would an actual, out-of-context photo look like? Well, maybe Jeremy might have just popped into his local co-op when a fan asked if he could take some snaps of him. And then, maybe as Jeremy was getting papped next to the fruit and veg, he was randomly photobombed by Hezbollah, right there in the middle of aisle three. Is this what happened? Of course not. Hezbollah isn’t into photobombing civilians, for starters. (Common or garden bombing civilians, yes. Photobombing, no.)

Instead, it was taken at the annual Al-Quds rally, tamely described in the same Indie article as a “pro-Palestinian protest.” In reality, Al-Quds Day was started by the late Ayatollah Khomenie of Iran, in order to stoke up global Muslim outrage against Israel. As such, it serves as a useful recruiting vehicle for Islamists to promote themselves as legitimate human rights campaigners.

Jeremy Corbyn, who was invited to speak there, should know all this. He should know that it is deeply hypocritical and, yes, problematic to attend an event that is essentially a PR move by a country that has no right to criticise Israel (The punishment for being homosexual in Iran i.e. the death penalty is more severe than that meted out in Israel for being a convicted murderer i.e. a jail sentence.)

It should be no surprise that the flag of a Iranian-backed Islamist group appeared at an Iranian-backed Islamist event. One might as well express shock after agreeing to speak at a rally about worker’s rights organised by the KKK, only to find that photos of you expressing support for minimum wage laws have “accidental” burning crosses in the background.

And it isn’t a smear to link Corbyn to Hezbollah, either. If any other politician had been seen in close proximity to that flag, they would have been able to credibly distance themselves from it. That isn’t an option for the new leader of the Labour party, who termed them his “friends” when he invited them to the House of Commons. More shockingly still, he referred to them as a “social justice movement” – like the Suffragettes, if the Suffragettes were committed to the use of indiscriminate violence against all men.

That’s why the British Jewish community is so concerned about him – not because he is any kind of anti-Semite, but because him and large sections of the left are so completely unconcerned about the toxic nature of groups and individuals that so obviously are. And that’s why Israeli media outlets, amongst others, are interested in the photograph – not because it misrepresents Jeremy Corbyn, but because it so perfectly reflects him.

Oh, and if you want to share the photo but don’t want to risk any legal blowback, why not share this graphic instead: 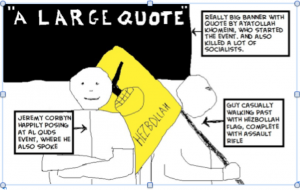