Update: Following a statement from the SU, WASH has issued this response.

If you haven’t yet caught up with this story an excellent summary of Warwick Student Union’s disgraceful decision can be read on Student Rights.  Briefly, Namazie had been invited to speak by Warwick’s Atheists Secularists and Humanists society on 28 October, but her invitation has now been blocked by the SU on the grounds that ‘she is highly inflammatory, and could incite hatred on campus’.

Although Warwick University is not a serial offender when it comes to extremist speakers, the SU’s position is clearly inconsistent.  As Student Rights points out, Ken O’Keefe was given permission to speak earlier this year:

Even the most cursory online search reveals that O’Keefe is an anti-Semitic conspiracy theorist, who was condemned by a number of student Palestine Societies in 2012 after he claimed that “Israel and Mossad were directly involved in 9/11”.

In response to this criticism, he suggested he was being attacked for standing against “the Jewish supremacism that is of dire consequence to our world” and claimed:

“Israeli Mossad worked with high treason traitors in the US government to set explosives in the twin towers and building 7 on 9/11“.

He has claimed that “for all of its problems, Hamas has done a good job of getting rid of the collaborators” – with this report into the murder of Palestinian civilians by Hamas demonstrating what that means in practice.

Namazie has eloquently countered the assertion that she is likely to ‘incite hatred’:

The Student Union seems to lack an understanding of the difference between criticising religion, an idea, or a far-Right political movement on the one hand and attacking and inciting hate against people on the other. Inciting hatred is what the Islamists do; I and my organisation challenge them and defend the rights of ex-Muslims, Muslims and others to dissent.

The Student Union position is of course nothing new. It is the predominant post-modernist “Left” point of view that conflates Islam, Muslims and Islamists, homogenises the “Muslim community”, thinks believers are one and the same as the religious-Right and sides with the Islamist narrative against its many dissenters.

Benjamin David, President of WASH, has also responded to the ban:

Maryam often describes the true facts concerning her own experiences and those of people she works with in relation to radical forms of Islam – not all forms of Islam, just those pernicious, radical strands of the religion – things that most peaceful Muslims would also condemn. I must profess that if those facts are an incitement of hatred – which I most definitely believe they are not – then the solution is to change the way people are treated in certain faith communities, not to insist Maryam lie about her life through censorship.

One problem with the SU’s decision is that it assumes Warwick’s Muslim students won’t tolerate challenging views:

Those speaking out against the ban include Muslims: 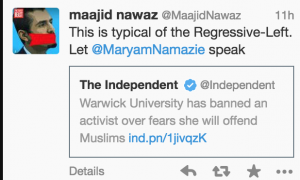 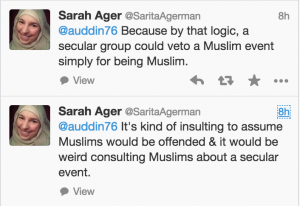 It’s good that this story has been picked up by the mainstream media as well as by secularist organisations and bloggers.  The Independent quoted the SU President’s ludicrous explanation for the ban:

Isaac Leigh, president of Warwick Student Union said: “The initial decision was made for the right of Muslim students not to feel intimidated or discriminated against on their university campus… rather than in the interest of suppressing free speech.

Even the most illiberal regimes don’t generally claim to silence dissent purely ‘in the interest of suppressing free speech’.  And anyone might ‘feel’ discriminated against – but having Namazie speak to a secularist society is in no sense an act of discrimination against Muslims.

Of course Maryam Namazie, who pulls no punches, is not everyone’s cup of tea – and it’s not just Muslims who dislike her.

Maryam Namazie of One Law for All is a Marxist antisemite who says she is an ex-Muslim and foe of jihad terror, but nonetheless has attacked Israel and spread Palestinian jihad propaganda on numerous occasions.

Whereas some Muslims on Twitter have gleefully welcomed the silencing of a ‘hate preacher’, and others, as we have seen, unreservedly oppose the ban, other Muslims have been supporting  her right to speak freely while making it clear that they think her views should be challenged. 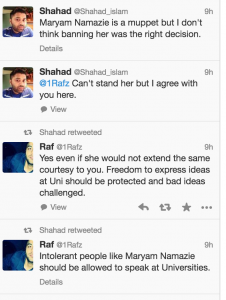