This is a cross-post from Paul Canning

Type ‘fascist Ukraine’ into Google and the first dozens of results all refer to the Ukrainian government and those forces fighting the Donbas separatists. 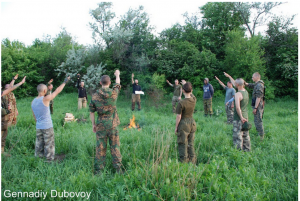 You will be hard pressed to find any references to the presence of fascists in Russia’s hybrid army in Ukraine. Ones like those pictured above in an astonishing piece of detective work by Dajey Petros.

Petros is a Dutch blogger who has been doing great work using similar tools to those employed by Eliot Higgins’ Bellingcat. Taking content from social media and using various tools to tell a story from it – like the story of the Russian missile which shot down the Malaysian Boeing.

Far right and fascist groups both in Russia and throughout Europe are backing the so-called Donetsk and Luhansk ‘People’s Republics’ (DPR/LPR) in word and deed. They are raising money for them, despite the sanctions. They hold mass rallies and other events. They send representatives to the Donbas to endorse the ‘Republics’. And they send Russians – and sometimes other Europeans – to join the fighting. All with the tacit approval of the Kremlin.

That approval was most sharply on display in March when Europe and Russia’s far right groups came together in a conference in St Petersberg. It was organised by the Rodina party whose leader is a Russian Deputy Prime Minister.

The event’s star was Alexei Milchakov, the leader of the ‘Rusich’ group of rebel fighters. Milchakov is infamousfor photographs of him with a Nazi flag and a puppy he had allegedly killed. He has also posed in front of the dead bodies of Ukrainian soldiers.

Many fascists were involved in setting up the DPR/LPR, such as Pavel Gubarev, the self-proclaimed first ‘People’s Governor of Donetsk’. His press secretary, Aleksander Kriakov, was described by Donetsk city Chief Rabbi Pinchas Vishedski as “the most famous anti-Semite in the region.”

When separatists took over TV broadcasting towers last year they boasted that:

Here, from Sloviansk, we are inflicting a powerful information conceptual blow to the biblical matrix … to Zionist zombie broadcasting.

They then presented a lecture by former Russian Conceptual Party Unity leader Konstantin Petrov, who the European Association for Jewish Culture (EAJC) describe as a “anti-Semitic neo-pagan national-Stalinist sect.”

In March last year Josip Zisels, Chair of the Association of Jewish Organizations and Communities in Ukraine, noted that pro-Russian organisations’ websites “have published many anti-Semitic materials which were meant to instigate hatred against the Maidan as being allegedly inspired by the Jews.”

Former DPR Prime Minister Aleksandr Borodai was a writer for the Russian fascist newspaper Zavtra. He opened the DPR’s first foreign ‘consulate’ on the premises of the Moscow branch of the Eurasian Youth Union (EYU), the youth wing of the Eurasia Party, headed by fascist ideologue Aleksandr Dugin. Dugin has openly called for genocide against Ukrainians. 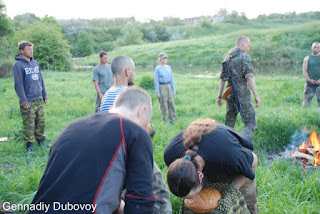 Another prominent Russian fascist in the Donbas is Gennadiy Dubovoy, whose colleagues are shown in the top and left photos participating in some sort of bizarre Nazi ritual. (See lots more whacky photos.)

Participating in the ritual are several women and one is Yuli Kharlamova, a presenter on the Russian TV channel ANNA- News and an FSB (Russian security services) agent.

There are many other individual as well as organised Russian fascists who have been documented from social media engaged in leading roles among the separatists. As Petros puts it “in Russia’s [hybrid] army the Nazis structurally and openly belong to the core and they train others.” Not only that but Russian soldiers who have been captured have been found to have Nazi tattoos.

Here are the patches for five fascist militias in that separatist hybrid army (there are others): 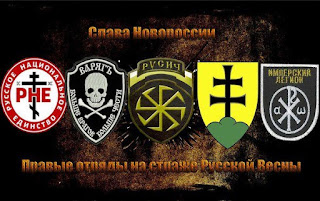 And according to the expert on the far-right in Europe Anton Shekhovtsov there is evidence that proves that “Russian fascist organisations have been heavily infiltrating and instigating pro-Russian separatist movements in South-Eastern Ukraine” before the Maidan.

The real politics of the DPR/LPR

The UK has an organisation supported by leading lights in the so-called and unfortunately influential ‘Stop The War Coalition’ which claims that the DPR/LPR are socialists fighting fascists, but when the DPR/LPR organised sham elections last November socialists and communists were excluded.

According to a separatist recruitment video:

The constitution also says that “any forms of perverted unions between people of the same sex are not acknowledged and will be prosecuted.”

The separatists running DPR/LNR have the documented support of only 18% of locals.

A further sign of the real politics of the separatists is shown by how anti-semitism fuels their infighting.

And in February, at a press conference, the leaders of the DPR/LPR, Zakharchenko and
Plotnitsky, ended their interview with anti-Semitic remarks.

Zakharchenko said: “I can’t remember, that at any time in Ukrainian history, cossacks were ruled by, well, not exactly those people, who ever carried a sword. Jews…”
Plotnitsky, (interrupting, grinning): “There is a video on Youtube ‘When the Jewish Cossacks have risen’, let them watch it”. Zakharchenko: “It’s not Jewish Cossacks, it’s miserable representatives of a great people, but they never ruled over cossacks. Taras Bulba and Taras Shevchenko would be turning in their graves because of such rulers in Ukraine.”

Abraham H. Foxman, National Director of the Anti-Defamation League (ADL), said that “those watching understood very well that this was an anti-Semitic appeal.”

This climate is being encouraged by Russian television, the only TV available in the ‘People’s Republics’, who during last year’s Ukrainian elections, accusedleading candidates of being Jews.

The lies about fascism in Ukraine

Human rights and Jewish groups both say that Russian claims, including by Putin himself, of rampant antisemitism, even ‘pogroms’, in Ukraine are not correct. Some of the incidents they recorded may actually have been orchestrated by Russian secret services, such as one which took place in July in Lviv.

The reality is that Ukraine has one of the lowest levels of anti-Semitic incidents in all of Europe, according to Josef Zissels, General Council Chairman of the Euro-Asian Jewish Congress.

An antisemtic poster distributed in Luhansk during the initial unrest. It reads “Jew Shuster [Savik Shuster, Kyiv-based TV presenter] will explain why Ukrainians must defend the interests of Jew [Prime Minister Arseniy] Yatsenyuk and Jewish oligarchs. Why Slavs must kill each other.”

Researchers of Ukrainian nationalism issued a collective statement last March saying that the Maidan was a liberationist, and not extremist, mass action of civil protest. It condemned reporting which “misrepresents the role, salience and impact of Ukraine’s far right within the protest movement.”

Left forces in Ukraine have also consistently spoken out at the mischaracterisation of the Maidan revolution as a ‘fascist coup’, however their voices have been drowned by the Kremlin propaganda machine and its Western sympathisers – as well as by much of the mainstream reporting.

The claim that fascists control Ukraine is propaganda by Putin. To those anarchists and left-wingers who believe Putin’s propaganda about a fascist regime in Ukraine and who support Russia I say:

Take a deep breath, gormless half-wits. For many years Russia has already had something like the kind of fascism which Ukraine is accused of. Anyone who supports fascists who save a neighbouring country from fascists must be either pretty stupid or completely devoid of any conscience.

The propaganda about Ukraine being ‘fascist’ directly fuels violence. It is consistently cited as a reason for those joining the DPR/LNR. This does not mean that the growth of nationalism in Ukraine should not be a concern.

Ukraine’s leaders have laid themselves open to criticism over the role of the Azov volunteer battalion, with its neo-Nazi leaders and probably members, as well as the more extreme elements in Right Sector and VO Svoboda. A few individuals such as Andriy Biletsky and Ihor Mosiychuk have won seats in Parliament, while others have received questionable appointments on the basis of their bravery in defending Ukraine. There are legitimate concerns about their role beyond the battlefield, as well as doubts about their motives as the recent conflict in Mukacheve has demonstrated.

All this is a gift for Kremlin propaganda, but it still does not justify broad claims about Ukrainian society. Ukraine’s two far-right parties did very badly in last year’s presidential and parliamentary elections, and no evidence exists that voters support anti-Semitic or xenophobic views. Now in Parliament, Biletsky reportedly claims that stories about his neo-Nazi and white supremacist views is all Russian slander. The denial is unconvincing, but it is telling that he sees the need to make it.

It is unlikely, she says that the Kremlin will “abandon its propaganda arsenal” and she warns about “fakes, manipulation, and total fabrication.”

Petros uncovered one such manipulation last year. A member of the now famous Ukrainian Azov battalion, whose members undoubtedly do include fascists, had posted a photo of his battalion posing with a Swastika flag. Petros proved it was a photoshopped fake, the original had no Nazi flag in it. Nevertheless here it was on Russian primetime TV news …

It is entirely right that Western media should report, as the BBC’s leading news show ‘Newsnight’ did recently, on the far right in Ukraine. What is wrong is that the presence of fascists in powerful positions among the separatists is being totally ignored.

Western journalists often say that they strive for ‘balance’. Well, where is it? On this issue they are doing what the Russians do – only report one part of one story.