I don’t know how many of our current readers were following Harry’s Place a decade ago, when Hurricane Katrina struck the Gulf Coast of the US, but our posts about it are preserved in the archives for anyone interested in visiting (or revisiting) them.

Our first post about Katrina– which ultimately cost hundreds of lives, perhaps nearly 2,000– appeared 10 years ago tomorrow. As you can see, my attitude changed from a reluctance to assess blame for the catastrophic results of the hurricane, to one of shock and anger at the failure of the Bush administration (but also state and local government) to deal adequately with the disaster, to one of disdain for elements of the Left for trying to make an issue of the alleged “military occupation” of New Orleans and for blaming the botched response to the disaster on the war in Iraq.

At one point, the comments became so heated that I shut them down, but published guest posts by others with different views from mine.

As I noted at the time:

The nation’s economy will be hard-hit by the effects of Katrina, but I expect buck-passing and blame-shifting will be growth industries in the weeks ahead.

More than a month after Katrina struck, I linked to a thoughtful piece by Washington Post columnist Anne Applebaum noting that most of the more extreme horror stories spread by the media about the breakdown of public order in New Orleans in the days following Katrina– what the city’s corrupt mayor Ray Nagin called “almost animalistic”– turned out to be either exaggerations or flat-out fantasies. She wrote:

What I’m guessing the Katrina rumors revealed was not precisely racism but a much deeper fear of the poor, even of poverty itself. What I’m guessing they revealed is our imaginary picture of what life would be like without the civilizing elements and the social markings to which we’re accustomed: our houses, our cars, our clothes, our possessions, our reputations, our authority.

Finally, I remember how much this photo– of Tanisha Blevin, 5, holding the hand of fellow Hurricane Katrina victim Nita LaGarde, 105, as they were evacuated from the convention center in New Orleans– heartened me in the midst of the horrible news: 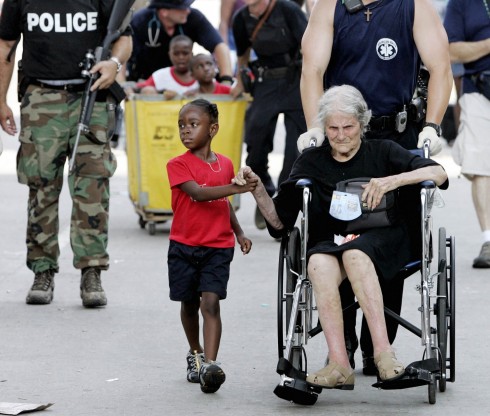