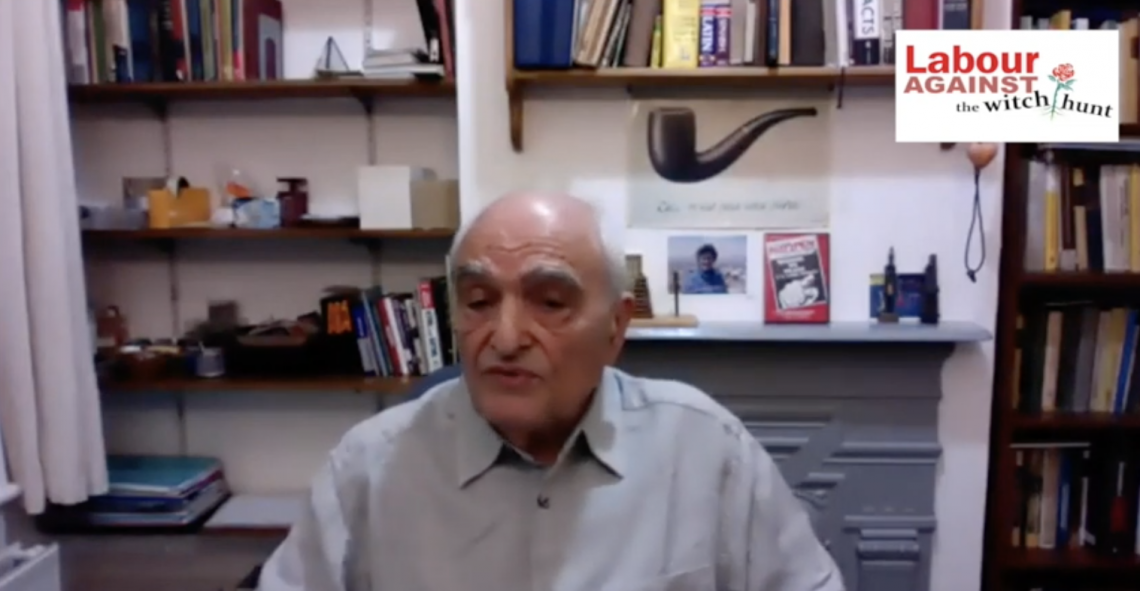 Jews Sans Frontiers has tweeted that controversial left wing activist Moshe Machover has been suspended from the Labour Party once again. 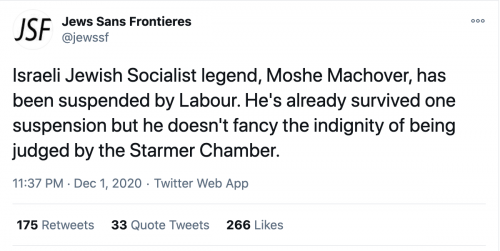 It may have had something to do with his appearance at a Labour Against the Witch Hunt meeting where he said:

“ Zionism serves to mobilize the working-class and generally public opinion in support of Imperialism and this is really the secret of what this huge campaign against the Labour Party, against Jeremy Corbyn and against those who supported him on the false accusations of antisemitism.

It is a mistake to suppose that this is purely the work of the Israel advocacy groups, so-called pro-Israel lobby, such as We Stand By Israel, the Jewish Labour Movement which is committed to advocate for Israel and the Board of Deputies of British Jews which is constitutionally committed to advocate for Israel, it is not purely those who are responsible for this campaign. They provide the theme, I mean, if they didn’t participate in accusations of antisemitism nobody would take it seriously, but the main let us say energy, let us say, main drive comes from the establishment, the pro-Imperialist establishment within the Labour Party and those parts of the Labour Party that are loyal to the British establishment and the British establishment itself outside the Labour Party which includes mainstream media, the BBC, the press, the prejudiced press that we have here, including the hypocritical so-called ‘Left-Wing’ Guardian”.

This is, it is very worrying that the main driving force of this campaign against the Labour Party under the guise of accusations of antisemitism, which are false by the way, the way you can see they are false and really exaggerated is that they don’t give any quantification they make the impression that the labour party is riddled with antisemitism however you define it. It’s badly defined by the way but the method, the question is not only of definition it’s also quantification. Any reasonable accusation should be accompanied by quantification; How many antisemites are there? Are there more antisemites than paedophiles? Are there more antisemites in the Labour party than wife beaters? Are there more antisemities in the labour party than in the Conservative party? They don’t actually give you this data. I mean are there hundreds of antisemities or hundreds of thousands?

They avoid these questions. And these are the hallmarks of a false accusation if it doesn’t give you, if it makes vague accusations without quantifying it that is the hallmark of a lie!”

Machover has been suspended from the Labour Party before only to have that suspension overturned by then leader Jeremy Corbyn’s office.