After shutting down much of the government for two weeks (not just parks and memorials) and bringing the country to the brink of default, Congressional Republicans have finally conceded that that they can’t achieve what they never stood a chance of achieving in the first place– defunding or delaying or weakening the Affordable Care Act, aka Obamacare.

Rush Limbaugh is really freaking out right now about the Republican party. 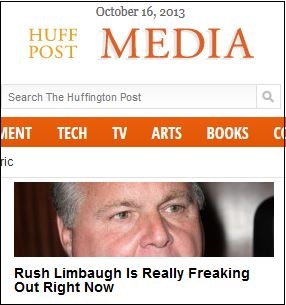 “I was trying to think if ever in my life, I could remember any major political party being so irrelevant. I have never seen it. I have never seen a major political party simply occupy placeholders, as the Republican party has been doing. There has not been any serious opposition…against what’s happening in this country. The Republicans have done everything they can to try to make everyone like them and what they’ve ended up doing is creating one of the greatest political disasters I’ve ever seen in my lifetime…I was pondering if I could ever remember…a time when a political party just made a decision not to exist, for all intents and purposes.”

Senator Ted Cruz said that by agreeing to a deal with Democrats to end the shutdown and avoid default, his fellow Senate Republicans were like an “air force bombing our own troops.”

This would be what Josh Marshall at Talking Points Memo calls a pass-the-popcorn moment for Democrats if not for the real damage that Congressional Republicans have done to the economy in the cause of… who knows what.

Cruz and his fellow rightwing purists and diehards have been compared, with some justification, to Leninists and Stalinists. But after their failure, the comparison that comes to my mind is Yosemite Sam in the 1950 cartoon “Bunker Hill Bunny”:

Mike Luckovich, cartoonist for the Atlanta Journal-Constitution, made another apt comparison: 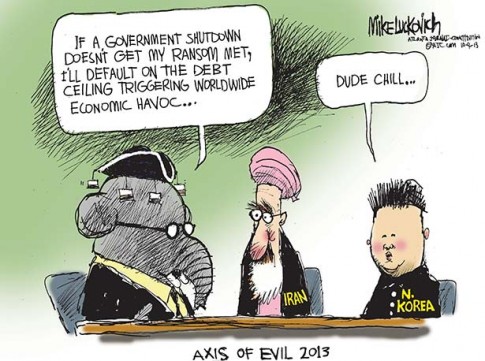 One result of all this, I hope, is that threats of government shutdowns or debt default will never again be used for political extortion– by either party. This would be as good for future Republican presidents as it is for Obama and future Democratic presidents. Unfortunately many of the current crop of Tea Party loyalists don’t think in such rational terms.

A relatively small group of Congressional Republicans have, despite their strong opposition to Obamacare, displayed refreshing sanity amidst the general craziness. Among them is Virginia Congressman Scott Rigell, with whom I’m sure I would disagree about 90 percent of the time. He makes the reasonable point that Republicans ought to behave in a way that they would want Democrats to behave when there is a Republican in the White House.