This is a cross-post from Marc’s Words

This is the first of what I think will be a bunch of posts about Hebron.

I went on trip there that has left me reeling in a number of ways, many of which I still haven’t assimilated fully.

The trip started in the settlement of Qiryat Arba and a stroll through a park named after the Rabbi Meir Kahana. His political party, Kach, was outlawed by the Knesset for being racist. A small way into our stroll we came to the beautifully tended grave of the revered Dr Baruch Goldstein, the man who shot dead 29 Palestinians and wounded 125 in 1994. He was number 3 on Kach’s Knesset list for the 1984 elections (before the party was banned). While we were standing around at the grave a man turned up, knelt at the grave and kissed the tombstone before walking away. He arrived at our tour group after assaulting the tour guide of the group that had been at the grave 5 minutes before us.

That tour guide spent the rest of the day at the police station filing a complaint. 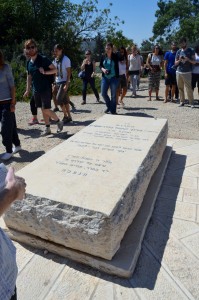 And so that was how I began my tour to Hebron with the group Breaking the Silence.

I had no idea that Qiryat Arba, a settlement of several thousand people, essentially sits adjoining Hebron, our bus traveled through the gates of the settlement straight into the outskirts of the city.

I admired the tomb of the patriarchs from outside and felt more than slightly ashamed that I had never been into the second holy site in Judaism. The building is magnificent, from the outside at least, it’s the central feature of the city, Holy to both Jews and Muslims though each has a separate section to pray in.

We walked through the empty street that lies just in front of the Jewish settlements in the area that house around 100 souls. The area’s dead. What was once the thriving heart of the city is now emptied of people for security reasons. In Hebron there are 700 settlers surrounded by 1,000 soldiers who are in turn surrounded by 180,000 Palestinians. To say that the place is tense would be an understatement.

There are a lot of things to say about Hebron but what really got me was this sign: 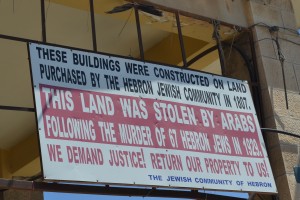 We’re in Hebron because other Jews were killed in Hebron.

And here I was thinking it had something to do with this building and Judaism: 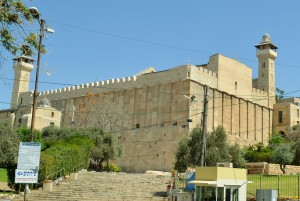