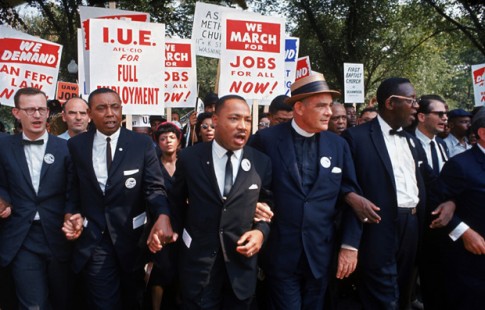 For those who weren’t reading Harry’s Place 10 years ago, here is my post from the 40th anniversary of the March on Washington. I think it holds up pretty well:

It’s nice that even conservatives can look back now on the August 28, 1963, March on Washington and feel warm and fuzzy about it. (They didn’t at the time.) But with all the justified attention to Martin Luther King’s great speech, I’m afraid other features of that historic day have been forgotten.

For example, it was called the March for Jobs and Freedom. The official demands of the March included a major public works program for all unemployed and an increase in the minimum wage to $2 an hour. And March organizer A. Philip Randolph, the leader of the Sleeping Car Porters union, told the crowd assembled in front of the Lincoln Memorial:

We are not an organization or a group of organizations. We are not a mob. We are the advance guard of a massive moral revolution for jobs and freedom. The revolution reverberates throughout the land, touching every city, every town, every village where blacks are segregated, oppressed and exploited. But this civil rights demonstration is not confined to the Negro; nor is it confined to civil rights; for our white allies knew that they cannot be free while we are not. And we know that we have no future in which six million black and white people are unemployed, and millions more live in poverty…

One of the wonderful things about the March was how it tied together demands for civil rights and economic justice for people of all races.

A few other notes:

• A. Philip Randolph was involved in organizing a March on Washington in 1941. That march that never happened, but the possibility of it persuaded President Franklin D. Roosevelt to issue an executive order banning racial discrimination in defense industries.

• The efforts by conservatives to appropriate the legacy of Martin Luther King and the March continue. For example T.W. Shannon, the African-American speaker of the Oklahoma House, spoke at a Republican-sponsored event in Washington marking the anniversary.

“The key to fulfilling the dream” of King’s, he said, included “quality education for all our children whether in public or private schools,” a “limited government” and curbing a “ferocious appetite for bigger government.” The dream, he went on, must be protected from “contaminants of government dependence, class warfare, socialism and any other pollutant that would muzzle the ring of freedom.”

Shannon proceeded to cite the case of an Alaska woman who beat a moose with a shovel to save her husband — evidence, he said, of “the raw heroic nature of our nation.”

As far as I know Dr. King never discussed moose attacks in Alaska, but he was an outspoken advocate for action by the federal government on behalf of the poor and unemployed. And he once said: “There must be a better distribution of wealth . . . and maybe America must move toward a democratic socialism.”

• I didn’t attend the March, but my father did. And my liberal, largely Jewish neighborhood in suburban Maryland hosted marchers from Danville, Virginia. A neighbor of ours had spent 11 days in jail there after she was arrested for protesting segregation with black residents of the town.