I try very hard to ignore Glenn Beck these days. I really do.

But sometimes the guy makes it pretty near impossible.

For one thing, his campaign against the nonexistent threat of the United Nations Agenda 21 (including a dystopian novel) convinced my representative in the Virginia House of Delegates, Republican Ben Cline, to waste his time, and that of his colleagues, with a crackpot bill. (See my letter to the editor of the Lexington News-Gazette.)

You may recall that two years ago, Beck traveled to Jerusalem to stage a “Restoring Courage” rally, of which he modestly claimed “the very gates of hell are gonna open up against us” and “possibly for the first time in man’s history, God will remember and make note of what we do there.”

While in Israel, he compared to communists the hundreds of thousands of Israelis who took to the streets that summer for social and economic justice.

The initiative, which offered up an epic rendition of America’s story — both past and present — provided thousands in attendance the ability to view the world through a unique lens. Rather than hearing from a human narrator, the historical and contemporary accounts were told by the “Man in the Moon.”

“You are at the same time arrogant and self-loathing. You are a puzzle. But the ancient truth remains: as the light grows dimmer, things begin to become harder to see,” the Man in the Moon said during the conclusion of the show.

“I came to love you in time, but I feared the dark side as well. I still do,” he added. “You have tremendous potential, potential for joy or hate, light or dark, life or death. But in the end, you choose. What a gift, what a joy to witness.” 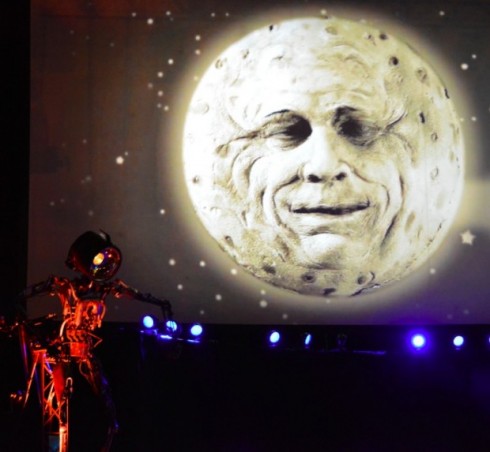 According to Media Matters for America:

In coordination with Man in the Moon, the Beck-affiliated charity Mercury One has been selling tickets for what is in effect a miniature, fringe version of the annual Conservative Political Action Conference — a series of 18 speeches, four panels, museum tours, and other events taking place over the course of the weekend starring a range of conservative figures, including Republican elected officials like Sen. Mike Lee and Rep. Chris Stewart. (Though Beck’s wife sits on the board of Mercury One, the organization writes on their website that Beck himself “has no official position” with the group, despite serving as their “greatest advocate and spokesperson.”)

Prices for the events range from free book signings with conservative stalwarts like Fox News contributor Michelle Malkin to a $1,000 Beck-guided tour of a special museum collection put together for the event featuring items like “George Washington’s original Badge of Merit” and “Joseph Smith’s exquisite gold pocket watch.”

I’m sure it was all very impressive, but I’m afraid I’ll always associate the Man in the Moon with Jackie Gleason and “The Honeymooners.”