Here’s a photo from Saturday night’s demonstration in Tel Aviv– part of a wave of protests in Israel that began with tent cities to call attention to the lack of affordable housing and morphed into a more general demand for social and economic justice. 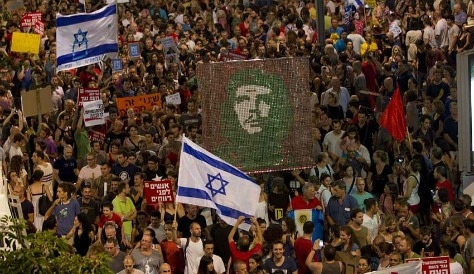 And yes, that’s a banner of Che Guevara side by side with that symbol of Zionist-imperialist oppression, the Israeli flag. It’s a reminder that Israel is a much more complicated, interesting and confusing place than either its uncritical defenders or bitter enemies sometimes grasp.

(It’s also a reminder that some Israeli leftists are as clueless about the murderous Guevara as leftists in other countries.) 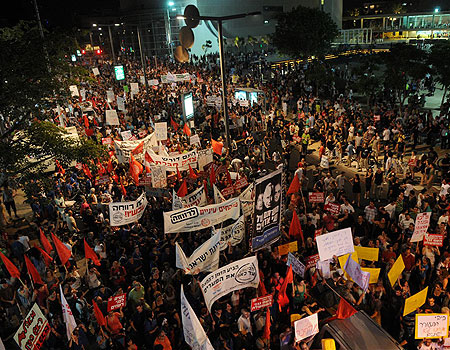 And sorry, anti-Zionists: most of those carrying red flags would be entirely prepared to fight and die for the survival of Israel if it came to that.

According to police estimates, 150,000 Israelis participated in demonstrations throughout the country on Saturday night. That’s the equivalent of 1.2 million in the UK or 6 million in the US.

Prime Minister Netanyahu considered the wave of unrest serious enough to cancel a visit to Poland in order to deal with it– or, more likely, pretend to deal with it. My impression from observing Bibi over his two terms as prime minister is that while he relishes standing up to US pressure on West Bank settlements, or warning that Israel will prevent flotillas from reaching Gaza, he is at something of a loss when dealing with domestic issues– especially the huge gap between Israel’s wealthy and the rest of the population.

One of the things that frustrated me when I lived in Israel the 1990s was the fact that issues of peace and security– as critical as they are– almost always dominated the political agenda. Social and economic justice seemed to be an afterthought for all political parties, left and right. So I’m pleased to see these concerns taking center stage, at least for now. I hope it portends something about the future of Israeli politics.

The protests break all the rules dictated for so long by the settlers. They don’t involve the Israeli-Palestinian conflict and the occupation, and they’re open to like-minded individuals, so the demonstrations have seen voters from Likud, Meretz and Hadash standing shoulder to shoulder; protesters with skullcaps and secular people, Jews and Arabs.

This poses a threat because just when the pro-settlement right thought its delegitimization campaign against the left’s remnants had been totally successful, a new political movement has sprung up that is refusing to cooperate with this old dichotomy and is calling for unconventional alliances.

I should add that those rules weren’t just dictated by the settlers; they were also dictated (or at least followed) by Peace Now and related movements.

(By the way, I miss Hannah Kim, who used to write about these issues for Haaretz. Does anyone know what happened to her?)

In a post about Israeli politics in 2003, I wrote:

Israel is in desperate need of a political realignment. But I doubt this is possible before a final settlement with the Palestinians. I hope that someday—when the struggle between Israel and Palestine is finally settled—Israeli politics will at last become more “normal,” allowing people who have disagreed on peace and security, but perhaps agree on most other things, to finally be on the same side.

I still hope so.