In the past few weeks, Stephen Sizer has written a series of blog posts about why the UK government should ban Christian Zionist preacher John Hagee for antisemitic remarks, dealing almost exclusively with the controversial remarks Hagee has made about Jews.

Sizer writes on his blog, in direct response to Hagee’s planned visit to the UK,

Sizer says he is opposing:

Sizer has campaigned on his blog to make sure Hagee is banned from the UK , publishing a letter calling for Hagee to be treated like Raed Salah was.

But what does Sizer think about Raed Salah himself – a religious cleric with far more extreme views and actions, who happens to be anti-Zionist?

Here’s a quick recap on Raed Salah and his views.

Salah pushes the antisemitic conspiracy theory that no Jews turned up for work on 9/11, writing in his party’s newsletter:

Haaretz reported that Raed Salah, the leader of the Islamic Movement in Israel, says that Jews used the blood of Christian children to bake bread:

“We have never allowed ourselves to knead [the dough for] the bread that breaks the fast in the holy month of Ramadan with children’s blood. ”Whoever wants a more thorough explanation, let him ask what used to happen to some children in Europe, whose blood was mixed in with the dough of the [Jewish] holy bread.”

Salah has not specifically denied saying this.

Raed Salah uses Nazi propaganda against Jews, and laughs about drawing swastikas to offend Jews. In 2003, he and four other members of the Islamic movement in Israel were arrested and charged with funding Hamas and illegal dealings with an Iranian intelligence operative. In 2005 he agreed to a plea bargain and was sentenced to three and a half years in prison.

Further to this, the CST reports:

It now appears that Salah does face a charge of inciting antisemitism in Israel, and that this charge relates directly to the ‘blood libel’ speech he is alleged to have given in Jerusalem in 2007. CST has obtained a copy of two outstanding indictments against Salah, both issued by the Jerusalem Magistrates Court and signed by the Jerusalem District Attorney. Both are dated 23rd June 2011, although we believe that the first indictment – the ‘blood libel’ – was first issued in January 2008.

How does Sizer relate to Salah?

It is embarrassing that a religious leader who has committed no crime in the UK, and who was invited to speak in Parliament, now finds himself living under strict bail conditions including the wearing of an electronic tag, observing a night-time curfew, reporting to immigration officials at noon every day, refraining from public-speaking and forced to stay at the home of a friend.

Sizer’s readiness to believe Salah without question is reminiscent of the pathetic denials from Hanan Chehata of MEMO and Sarah Colborne of the PSC, who refuse to deal with the clear evidence of Salah’s most concerning words and actions.

But Sizer really takes the biscuit with his logic here:

Yesterday afternoon we took Sheik Salah for a meal in a local restaurant. Both there and as we walked back to the car along the streets of North London, people recognised his distinctive smile and warm features, and came over to shake his hand, bow slightly in respect, or ask if they could have their photo taken with him. This seems to contradict the Home Secretary’s view that his presence in Britain is “not conducive to the public good”.

Yup. If people want a photo with you, you must be alright!

With this established, here are some photos from Sizer’s meeting with Salah.

They are in fellowship with one another: 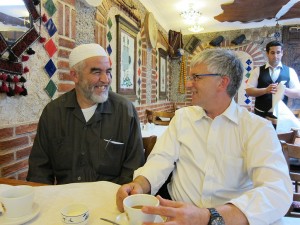 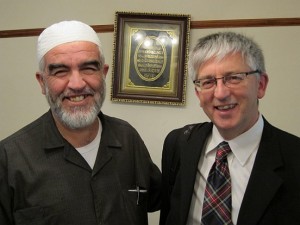 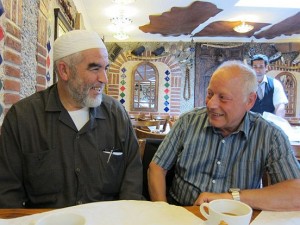 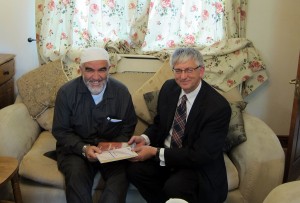 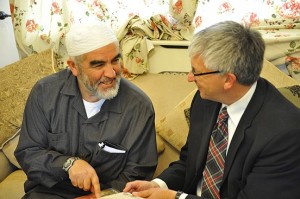 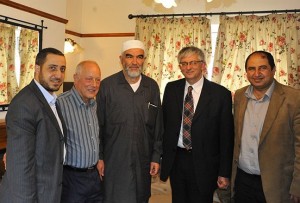