You have seen Raed Salah’s lurid claim that Jews were warned in advance of the 9/11 attacks and did not go to work at the World Trade Center on that day. It appeared in an article in Saut Al-Haqq Wa Al-Hurriya, a publication of Salah’s lslamic Movement.

Memri has more on the article. In another paragraph, Salah’s trademark insane and incendiary lie is pressed into service yet again. You see, 9/11 too was part of the Israeli plot to destroy the Al-Aqsa Mosque in Jerusalem:

The unique mover wanted to carry out the bombings in Washington and New York in order to provide the Israeli establishment with a way out of its entanglements, and in order to divert the attention of the media towards the American continent. This would allow the Israeli establishment to deal with our Palestinian people without [outside interference], and would give the Jewish extremists a rare opportunity to work towards destroying the Al-Aqsa mosque.

It is this segment above all, though, that stands out in the report. It is both ludicrous and sinister:

The unique mover knows that American history is beset with endless mysteries: Who murdered John Kennedy, and why, considering that he was the first Catholic to become president of the U.S.? Who was behind the Monica [Lewinsky] scandal, and why, and who benefited from it?…

Considering these endless mysteries, [we may conclude that] the unique mover had no problem adding yet another unprecedented mystery to American history, which is [has always been] riddled with ambiguities and with 1,001 questions, from the [Benjamin] Franklin document until today.

Salah’s reference to Benjamin Franklin is the most sinister part.

In the 1930’s a hoax text was published, purportedly reporting a speech by Franklin which warned America about “the great danger that is the Jew”. It is believed to be the work of an American fascist and Hitler lover, William Dudley Pelley. The Nazis themselves also made use of the hoax in their propaganda operations. So has Osama Bin Laden. 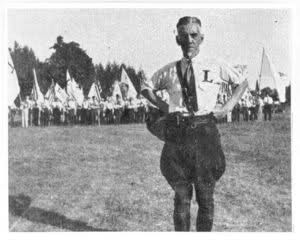 Perhaps Richard Burden MP could reflect on that. Here is a caption and picture from his Flickr pages.

Richard signed the Book of Commitment in the House of Commons to mark Holocaust Memorial Day 2011 – to honour those who perished in the Holocaust and to make a clear statement that hatred and prejudice of all kinds must be rejected. 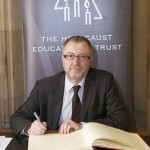 While he is at it he should also consider the vile Israelis-are-Nazis slur uttered by Ismail Patel at the same meeting where Burden claimed “Neither I nor anyone else on this panel has any truck with antisemitism, any truck with racism, whatsoever”. This is what Patel said:

Never again should mankind oppress another because of the difference in their faith as was done in Germany during the Holocaust. The Palestinians have been expelled just because they are Palestinians. If we want ‘Never Again’ to come true we must motivate ourselves to keep the Palestinian presence in former Palestinian land, in a state where all faiths are equal and not a state where only Jews have the right to exist. 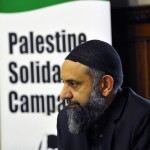 Ismail Patel at the Raed Salah meeting in Parliament

Patel was one of Raed Salah’s hosts in the UK and he and his Friends of Al-Aqsa group have been at the forefront of the campaign for Salah’s release.

A petition calling Salah a “human rights activist” has been produced. Friends of Al- Aqsa are even asking mosques and imams to lead Muslims in prayer for Salah. Patel has also visited Salah in prison. Then there’s this “Action Alert”, which flatly denies the evidence against Salah. The capital letters are in the original.

3. Shaykh Raed is one of the most prominent Arab political leaders and was elected as a mayor 3 times. HE IS NOT HATE PREACHER

4. Shaykh Raed has commenced legal proceedings against two British newspapers for the false and potentially libellous accusations they have made against him including claims that he is anti-Semitic. By deporting him the British Government will interfere in these proceedings and deny him the right to clear his name.

5. It appears Theresa May’s actions are not based on clear evidence but rather on hearsay and this is unacceptable behavior from the British government.

Patel is a Hamas supporter, a fan of the Holocaust denier Roger Garaudy, and an antisemite. Here he bellows for Hamas at a demonstration in London.

Hamas is no terrorist organisation. The reason they hate Hamas is because they refuse to be subjugated, occupied by the Israeli state, and we salute Hamas for standing up to Israel.

If Mr Burden really wants to make “a clear statement that hatred and prejudice of all kinds must be rejected”, he should apologise for his spinning for Raed Salah.

He should also work hard to ensure that Salah’s foul supporters, such as Ismail Patel, Middle East Monitor, and the Palestine Solidarity Campaign, never have another chance to stage a propaganda stunt in Parliament.