Raed Salah thinks taunting Jews with the swastika is funny.

Watch him in this video. He recounts one of his school days. A Jewish teacher – rare in his school – was humiliated and hurt with just that symbol. See how he chuckles at the memory with Azzam “Kaboom” Tamimi, his host on this clip from Al-Hiwar, a London-based broadcaster for the Muslim Brotherhood.

Mr Salah is oh so witty.

Now for the wisdom. What was Hurricane Katrina? As Salah said on an Iranian channel, Allah’s wrath on George Bush.

This is the gross and backwards man Islamists and far left idiots are rallying to defend.

George Galloway has stepped in with a lie for the cause:

You can see the full report that clip is taken from on Iran’s RePress TV here. It’s repulsive.

Galloway was due to speak alongside Salah at events this weekend staged by the Palestinian Forum in Britain (PFB). Salah was otherwise engaged, as we know, while another scheduled speaker at the events, Ahmad Nofal of the Jordanian Muslim Brotherhood, has also been banned from the UK. He was stopped in Amman before he could board a plane to London.

You can read more about Mr Nofal here or in this article, which includes this gem from his stock of wisdom:

Every man-made ideology in the world, Nofal says, from Marxism to capitalism, was invented by the Jews to dissuade Muslims from their faith. The governments of America and Europe, moreover, are Islam’s enemies because they’re under Jewish control. He tells the faithful to be servants of God—not “servants of women and servants of the dollar”—and he throws curses down on “Bush and Blair.”

Brent council cancelled the booking for the event in London. 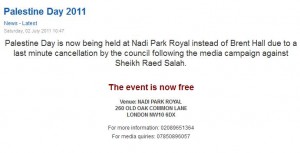 Perhaps the tide in Britain is finally turning decisively against Islamist extremists and their disgusting far left friends.