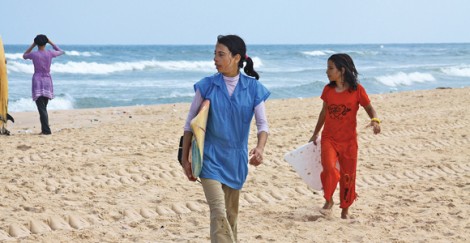 A reminder that even in a place like Gaza, girls sometimes manage to have fun– although the “traditional” values imposed by Hamas don’t make it easy.

Sitting in her family’s living room later, Rawand tries to explain: “It’s a great feeling when I surf, but I won’t surf when there are a lot of people around. It’s so weird for them to see a girl surfing. It gets crowded, and I just can’t handle everybody looking at me.”

But in a place where few women even swim, Rawand’s adolescent reasoning carries complicated consequences. Since Hamas took control of the territory in 2007, the militant group has been working to inculcate conservative Islam in an already traditional society. As a result, the daughters of the strip’s male surf community must navigate ever more treacherous waters.

“Our society is different than others, there’s no way the girls can surf on a crowded day,” says their surfing teacher, Al-Hindi Ashour. “To their parents they are still kids, but some people here look at them like adult females already … They may say things about them in the future.”

Rawand’s cousin Shurouk Abu Ghanem is also 13. On land, she wears a hijab, the Muslim head scarf. In the water, Shurouk stuffs her long brown curls into a cap.

All of the girls surf clothed from head to foot. They prefer to practice in groups of other surfers and swimmers (their male cousins, brothers, and fathers), reasoning that the more people in the water, the less likely that anyone on shore will notice girls on a board.

“I’m not doing anything wrong. No one has the right to say anything to my daughters or me. But in the end, I can’t live outside the traditions of my society. There are limits to where we can have our freedoms here,” Rajab, Shurouk’s father, tells me.

So the girls and their parents agree—they won’t be able to surf after they turn 17. “Doing something only boys do means I’m unique. I’ll go to another hobby—that’s the way it works here,” Rawand says. “But I will have the same confidence. I won’t change.”