Who’s being decorated by Hamas leader Ismail Haniyeh for services to the terrorist group? 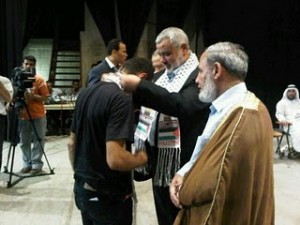 It’s Kevin Ovenden, a trustee of Viva Palestina, yesterday at a convoy ceremony hosted by Hamas in Gaza. 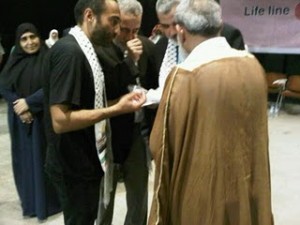 Haniyeh was grateful for the support:

“The arrival of the Viva Palestina Lifeline 5 convoy, organized by the UK-based charity Viva Palestina, in Gaza is a blow to the Israeli siege and international organizations which remain silent,” Haniyeh said on Friday.

He further pointed out that the convoy “represents condemnation of the [UN] Security Council and the international community, which remain quiet on the siege. It carries support for the Palestinian position of holding onto their land and rights.”

“There will be no recognition of a Jewish state, because the occupation is void,” he noted.

And who’s the bearded man with the brown cloak in the pictures? It’s Mahmoud Zahar, a notorious Hamas hardliner. His line during the Gaza war was this: kill Jewish kids anywhere in the world.

Fighting intensified on the northern outskirts of Gaza City yesterday as a Hamas leader warned that the Islamists would kill Jewish children anywhere in the world in revenge for Israel’s devastating assault.

In an earlier ceremony in Rafah, the convoy was welcomed by another Hamas leader, Ahmed Youssef. Here he is at the podium in the picture below. 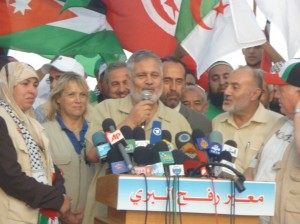 Youssef too approves of murdering civilians. You can watch him at it in this BBC interview, where he justifies a Hamas attack on settlers in the West Bank. One of the murdered was a pregnant woman. The aim of the attack was to disrupt the latest round of peace talks.

Anyone who considers the events of 9/11 cannot say that the Muslims gained anything. There’s another dimension, which some people may have noticed. No one could have captured the pictures [of the attacks] so perfectly except for the cameras in the hands of several Mossad agents, who were near the scene of events and succeeded in filming the scene so that it will always serve Zionism to remind the world of the Arabs’ and Muslims’ crimes against America. These pictures were filmed very expertly, so that they would be a constant reminder to America and the Western world that Islamic terrorism is a threat to their culture, their ideals, and their values.”

Host: “Regardless of who the perpetrators were…”

Yousuf: “Today, there is much evidence casting doubt on the ability of these Muslims, with their meager means, to carry out such an operation, and there are others… Who profited from this operation more than the Zionist movement? Since the end of the Cold War, Israel has been trying to attain a position that would allow it to direct American policy, because Israel found it impossible to confront the Islamic enterprise and the Islamic resistance. Therefore, it had to drag America into the region. This was the grand scheme – and American right-wing forces may have participated in it, and evangelical Christians agreed to it. All of them agreed that this scheme should be carried out in this way in order to push America into war.

Going back to the picture, smirking behind Mr Youssef is Muhammad Sawalha, one of the most important Hamas operatives in Britain. He wants to annihilate Israel:

“We will always be ready to come to Gaza because Gaza leads the international struggle for freedom and deliverance from [the control of] Zionism. Victory and dismantlement of the racist state are near,” Sawalha said. “

Will anything be done about Viva Palestina repeatedly breaking sanctions law by funding Hamas?

Of course not. The UK is a great hub for terrorist finance and the Charity Commission is determined to do absolutely nothing about it.

Meanwhile Viva Palestina has the backing of the so-called Palestine Solidarity Campaign (PSC), which has a contingent of its own on the convoy. So does the trade union Unite.

And on November 2, according to the PSC, Viva Palestina will be hosted in Westminster by Labour MP Andy Slaughter.

Why doesn’t Mr Slaughter start that session with an inspirational video.

Gene adds: There were reports that during the 2008-09 Gaza war, Hamas raided UN humanitarian convoys and sold the goods to the highest bidders. What guarantee is there that Hamas will not seek to profit from this latest aid?