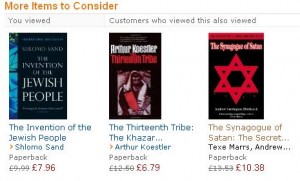 From the reviews of The Synagogue of Satan: The Secret History of Jewish World Domination:

This is an astonishing book by today’s standards, this would have been supressed/burnt in the past, so I can’t understand why its published. It is an excellent expose of what is REALLY going on in our world today, not the box in the corner called a television filling our screens with propaganda. It is well worth reading, but you will be in for a shock, for a start how the Rothschilds operate is pure evil and sickening. The mind set of these people is shocking. The fact that 90% of the Jewish people in the world today are not Hebrew jews but Ashkenazi Jews is a fact you can read in Arthur Koestler’s book ‘The Thirteenth Tribe’, the fact that the Rothschilds set up Israel, using war and rascism for there own ends etc. Read it and educate yourself.

I’m sure the first thing that this book was called was “anti-semitic”! As the author beautifully illustrates that any threat to the Jews or their interests is immediately blocked by the ‘anti-semitic’ shield. I say, whatever happened to freedom of speech? The people have the right to their views and opinions!

The information states things I already knew, but only boradly without knowing the specifics of who, how, when, where, and why, the book really delves deep and explains step by step and year by year how a certain bloodline has planned throughout the ages and gained control over the world through finances and usury!

Some people call it scaremongering, it’s not! This is the dark reality that we live in these days. The world is not a rainbow once you get past the thin superficial layer of life! There are no accidents, it’s all going according one grand master plan!

The Revelation of St John the Divine:

I know thy works, and tribulation, and poverty, (but thou art rich) and I know the blasphemy of them which say they are Jews, and are not, but are the synagogue of Satan.