When Durham University entered into a “Memorandum of Understanding” with the Cultural Consulate of the Iranian Embassy, it received criticism from many, including me.

Now that the “Green Movement” has revitalised the Iranian pro-democracy politics, Dr Colin Turner has discovered that partnering with a theocratic and sclerotic regime which tortures and murders its own students in a vain attempt to cling to power has a down side,

Dr Colin Turner, co-director of Durham’s Centre for Iranian Studies, lashed out after supporters of Iran’s green movement campaigned against a seminar on culture and politics that was funded by the Iranian state, but boycotted by the main speakers and all Iranians at the university.

The seminar was held on 28 January, the day the authorities in Tehran announced the execution of two young men it described as terrorists, in the presence of Durham’s mayor and the university vice-chancellor. Iranian students in the UK are also enraged by the fact that a Durham postgraduate colleague is missing, presumed in detention in Iran after having had his passport confiscated. Feelings are running high in advance of this week’s 31st anniversary of the 1979 revolution.

Protests began shortly after the seminar was announced. Dr Homa Katouzian, an Oxford-based academic who was billed as the keynote speaker, decided to pull out to avoid controversy. A Paris-based colleague followed suit. The event was addressed briefly by the cultural attache at the Iranian embassy in London, Ali Mohammad Helmi, who is described as a hardline supporter of Iran’s supreme leader, Ayatollah Ali Khamenei. The result, Turner admitted afterwards, was that the seminar was “monopolised by pro-regime speakers”.

Well, what a surprise! Who could possibly have predicted that pro-democracy Iranian academics might have a problem appearing on the same platform as hardline Khamenei supporters.

Durham students have a particular reason for solidarity with Iranian students:

Shahi’s fellow student, Ehsan Abdo-Tabrizi, was apparently detained after flying to Tehran before Christmas. He has not been heard from since being ordered to meet government officials.
…
“Things are getting bad,” Katouzian [who pulled out of the event] said. “People like me want to get on with their academic work in a way that maintains their integrity.” Katouzian’s star student, doctoral candidate Mohammadreza Jalaeipour, was arrested on a visit to Iran during the unrest after last June’s disputed presidential election. He is now on bail but unable to leave the country.

What is Dr Colin Turner’s reaction to the collapse of his conference? You won’t be surprised!

But he rejected “wild and damaging allegations” of support for President Mahmoud Ahmadinejad that had been made against colleagues by green activists. “These same people who denigrate us have absolutely no problem in accepting scholarships from the British government – which has turned the slaughter of innocent teenagers in Iraq and Afghanistan into an art form. Before they accuse us of receiving what they term ‘blood money’ from our Iranian funders, maybe they should look a little more closely at the source of their own funding.”

Turner also referred to the “barbarism” of the British government in the Middle East.

So why does the Islamic Republic of Iran sponsor events like this? One student has no doubts:

Green supporter Roya Farazman said: “It is crystal clear that the Iranian government supported this event not for the sake of academic discussion. Rather they are desperate for attention from reputable US and British universities.”

Has Turner learnt his lesson? Apparently so:

Turner, who supervised Tabrizi, insisted he was “completely aware that conferences … are seen as propaganda opportunities by the Iranian regime” and would not accept funding from the same sponsors again. “Iranian money comes with strings attached, as we have found to our chagrin,” he wrote.

In fact, Dr Colin Turner is increasingly switched on to the issue. Yesterday, our comrade Potkin published a remarkable story about two academics – Dr. Anna Contadini lecturer in Art and Archaleogy at SOAS and Mohammad Abdel Haleem, SOAS lecturer in Islamic studies – who are pictured receiving awards from “President” Ahmadinejad himself.

You say: “No one has betrayed the Iranian pro-democracy movement more than UK universities and academics.”

On two occasions I have refused to become a propaganda pawn of the regime by accepting prizes given to me by the IR on account of my academic work. Don’t tar us all with the same brush.

What about the centre’s director, Dr Reza Molavi?

The centre’s director, Dr Reza Molavi, said the seminar had been funded to the tune of around £5,000 by Iran’s equivalent of the British Council but insisted there had been no promotion of the regime. “We don’t think that by isolating them we will do any favours to Iran or Iranians. These students who have raised Cain about this are young and temperamental and may have made decisions that are not in tune with what realities dictate.” He was “not aware” of Abdo-Tabrizi’s whereabouts.

Cracking! “You are young and temperamental and may have made decisions that are not in tune with what realities dictate”. I bet that’s exactly what the Revolutionary Guards tell young students, before they beat them up and rape them in Evin Prison.

PS – if you’re interested in seeing the Memorandum of Understanding, here it is: 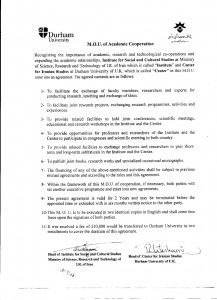