Who is the woman on Moazzam Begg’s Facebook page? 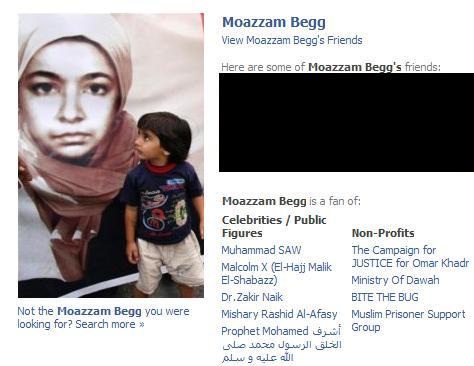 It’s Aafia Siddiqui, who has been convicted of attempted murder in the United States.

Not before identifying her real persecutors in courtroom outbursts during jury selection, of course:

On questioning during jury selection: “The next question is going to be on anti-Semitism, and all I said was Israel was behind 9/11, and that’s not anti-Semitism!”

On potential jurors: “If they have a Zionist or Israeli background . . . they are all mad at me. I have a feeling everyone here is them [sic] – subject to genetic testing. They should be excluded if you want to be fair.”

“This is a verdict coming from Israel, not America. Your anger should be directed where it belongs. I can testify to this and I have proof.”

Cageprisoners and its patron Yvonne Ridley have been the most active British campaigners for Siddiqui for many years. They have told one dark tale after another about her alleged abduction in Pakistan by the US and five years of detention and torture in Afghanistan, backed by little evidence and flatly contradicted by both the US government and her former husband.

Ludicrous denial and toxic allegations are still the order of the day. Here’s Ridley on the verdict, as published by Cageprisoners:

But I really don’t think we can blame the jurors for the verdict – you see the jury simply could not handle the truth. Had they taken the logical route and gone for the science and the hard, cold, clinical facts it would have meant two things. It would have meant around eight US soldiers took the oath and lied in court to save their own skins and careers or it would have meant that Dr Aafia Siddiqui was telling the truth.

And, as I said before, the jury couldn’t handle the truth. Because that would have meant that the defendant really had been kidnapped, abused, tortured and held in dark, secret prisons by the US before being shot and put on a rendition flight to New York. It would have meant that her three children – two of them US citizens – would also have been kidnapped, abused and tortured by the US.

They say ignorance is bliss and this jury so desperately wanted not to believe that the US could have had a hand in the kidnapping of a five-month -old baby boy, a five-year-old girl and her seven-year-old brother.

They couldn’t handle the truth … it is as simple as that.

Cageprisoners even published a scurrilous suggestion that the US had murdered Siddiqui’s children:

When [FBI agent] Sercer was further questioned about what Siddiqui said about her children during that two week period, she admitted that Siddiqui expressed concern about the “safety and welfare of her children”, but felt that the “kids had been killed or tortured in a secret prison”. “She said that they were dead, didn’t she” asked Defense attorney, Elaine Sharpe; reluctantly Sercer answered, “Yes”.

Siddiqui herself may not know whether the children are alive or not. In a psychiatric report she told an interviewer “my baby is flying but he does not grow”, “maybe it’s because I’m not nursing him”. Nonetheless, it is surprising that the testimony presented at her trial did not prompt an immediate state department investigation. After all, at least one of the children, Maryum, who would now be 10 years old, is a U.S. Citizen.

If it is true that the kids have been killed, then, the question arises, who will be charged with “attempting to murder a U.S. National”, for that crime.

Elsewhere on Begg’s Facebook page you will see that he is a “fan” of the Muslim Prisoner Support Group. It is a charity that has campaigned with Cageprisoners. It has also had two terrorists for trustees: Taj Abbas, one of the trio that attempted to burn the would-be publisher of Jewel of Medina and his family to death, and Mohammed Al Ghabra, who is on the UN al Qaeda and Taliban sanctions list. This is how the US profiles Al Ghabra:

Al Ghabra has organized travel to Pakistan for individuals seeking to meet with senior al Qaida individuals and to undertake jihad training. Several of these individuals have returned to the UK to engage in covert activity on behalf of al Qaida. Additionally, Al Ghabra has provided material support and facilitated the travel of UK-based individuals to Iraq to support the insurgents fight against coalition forces.

How nice to see a “human rights campaigner” backing an outfit like Muslim Prisoner Support Group.

Begg is also a “fan” of Zakir Naik, an Indian Islamist preacher who runs “Peace TV”. This is how he is summed up in one Bangladeshi magazine:

And, surely, with the slogan of ´solution for humanity´, Dr. Zakir spreads religious hatred, poison, and regularly attacks Judaism, Christianity, Hinduism, Buddhism, Jainism and other religions in the world and cleverly tries to project Bible, Torah and other Holy Scriptures as fake or changed. Dr. Zakir Naik, being a fanatic Muslim not only tries to continue his own way of spreading religious hatred and extremism through his so-called lectures but even promotes the idea of jihad and Islamist aggressions. He has definitely found a very effective tool, when he was able to establish PeaceTV, and now continuing his hate speech agenda as well as his own publicity and promotional programs to project other members of his family as ´Islamic Scholars´ [which includes his minor son and daughter]. And millions of dollars donated mostly by Muslim from the portion of their Zakat fund is going right inside the pocket of Dr. Zakir Naik, and he leads a very lavish life while spending this fund not only for running his own PeaceTV but also for buying luxury and comfort for other members of his family.
…
Commenting on Dr. Zakir Naik, an eminent Indian sociologist Imtiaz Ahmed said, “Brought up on the heavy dose of Saudi Arabia-backed Salafist-Wahabi Islam, Naik follows a supremacist ideology. “The Saudis think they have a divine right to convert Muslims across the world into a puritanical Salafist Islam. Naik is their public face.”

He said, “The exclusivist Wahabism is inimical to an inclusive, tolerant Islam practiced in India. I have heard him a couple of times on TV and am deeply disappointed.”

Dr. Zakir Naik, on a number of occasions, defended Osama Bin Laden and Al Qaida. His remark on Osama bin Laden had created quite a controversy some time back. “If Osama bin Laden is terrorizing America or the enemies of Islam, every Muslim should become a terrorist. I can’t call Osama a terrorist because his involvement in the dastardly act of 9/11 is not proved,” Naik had said, defending the most wanted man in the world.

“If Osama bin Laden is terrorizing America or the enemies of Islam, every Muslim should become a terrorist.” Here he is:

A longer clip from that speech, where Naik praises the Taliban, is available here. More on his 9/11 troofery can be read here.