The depressing news today is that 57% of those participating in the Swiss referendum have voted to ban the construction of minarets.

“These concerns have to be taken seriously. However, the Federal Council takes the view that a ban on the construction of new minarets is not a feasible means of countering extremist tendencies,” she said.

She sought to reassure Swiss Muslims, saying the decision was “not a rejection of the Muslim community, religion or culture”.

Although the vote no doubt reflects fears of extremism to some extent, it is also quite obviously also intended to be a “rejection of the Muslim community, religion or culture”. There is nothing intrinsically offensive about mosque architecture. Minarets do not symbolise the politics of Al Qaeda or the Muslim Brotherhood. They are a common feature to the many varied traditions within Islam.

Here is one of the posters that was used to promote the ban. 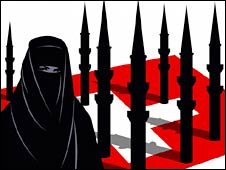 The visual message is clear, isn’t it? Minarets are a metaphor for Muslims, and they’re taking over Switzerland, in their sinster veiled minions. There is no attempt here to differentiate between ordinary Swiss Muslims and the particular clerical fascist parties that present themselves as religious movements. This is broad brush attack on anybody who identifies as Muslim.

Other posters produced by the SVP make it even clearer. 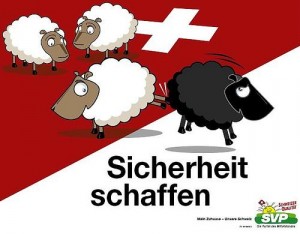 It isn’t even the fact that the ‘black sheep’ are Muslims that is highlighted here, is it? What is being threatened is the expulsion of those who are simply not white.

And what about this one? 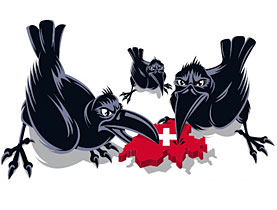 The black ravens are literally dismembering Switzerland. Not Jihadists. Not Islamists. Birds, whose defining characteristic is their negritude.

This is a moment of disgrace for Switzerland. As the opposition campaign points out, this is the sort of attack on religious minorities, on the principle of freedom of religious expression – quite innocuous, architectural expression – that you would expect to see in a totalitarian state:

What is interesting, and particularly worrying about this vote is that it was not expected. According to Sky News, “days before the election only 37% of people polled by state-owned television station DRS said they would support the ban”.

What this suggests, to me at least, is that Swiss people are somewhat ashamed of their views on the issue, but sufficiently frightened to vote for the ban, nonetheless. It is the Swiss People’s Party and their counterparts in the far right Islamist parties which have conspired to terrify them.

Ordinary Swiss Muslims are paying the price of this battle between extremists.