This Saturday the self-styled Islamic Human Rights Commission (IHRC) will host Achmad Cassiem of South Africa at the Islamic Centre of England in Maida Vale, the representative office of the Supreme Leader of Iran.

He will be right at home with the freedom hating Khomeinists of the IHRC. Here he is on a visit to Iran in 2003:

“Wondering through the streets I observed no liquor adverts, no night clubs, no pornographic display boards – the billboards along the roads had no semi-naked women as in all western and unfortunately most Muslim countries, but instead beautiful revolutionary slogans, photographs of some of the great leaders of the revolution. That was noticeable immediately…” 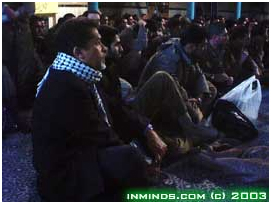 He has certainly tried to implement Khomeinist idiocy at home. Qibla is one of his outfits. This is how it is described in the 1999 version of the US State Department’s “Patterns of Global Terrorism” report (pdf, 3.9 MB):

Qibla is a small South African Islamic extremist group led by Achmad Cassiem, who was inspired by Iran’s Ayatollah Khomeini. Cassiem founded Qibla in the 1980s, seeking to establish an Islamic state in South Africa. PAGAD began in 1996 as a community anticrime group fighting drug lords in Cape Town’s Cape Flats section. PAGAD now shares Qibla’s anti-Western stance as well as some members and leadership. Though each group is distinct, the media often treat them as one. Both use front names including Muslims Against Global Oppression (MAGO) and Muslims Against Illegitimate Leaders (MAIL) when launching anti-Western campaigns.

Activities
Qibla and PAGAD routinely protest US policies toward the Muslim world and use radio station 786 to promote their message and mobilize Muslims. PAGAD is suspected in the car-bombing on 1 January of the Victoria and Alfred Waterfront in Cape Town and the firebombing of a US affiliated restaurant on 8 January. PAGAD is also believed to have masterminded the bombing on 25 August of the Cape Town Planet Hollywood.

There is more on Qibla and Islamist radicalism in South Africa in this report (pdf, 2 MB) and this profile. Or try this report, which includes coverage of how Qibla and PAGAD members treated their fellow Muslims in the 1990s:

What is fact is that four Pagad founders – Ali Parker, Farouk Jaffer, Nadthmie Edries and Ebrahim Satardien – complained of a ‘Qibla faction’ with a ‘hidden agenda’. They were expelled in September 1996. Jaffer was subsequently assassinated, as was Satardien three months later. Both killings were marked by many shots to the head. Satardien’s brother was Imam of the Lotus River mosque. When he criticised Qibla at meetings, his mosque was petrol-bombed. There was an attempted assassination of Ali Parker. Pagad’s G-Force also threatened to kill any members who dropped out. Aslam Toefie, the national co-ordinator, and other founding leaders also resigned, warning that what was going on in Pagad gave an alibi to gangsters and drug dealers to commit crimes, claiming they were done in Pagad’s name.

The first sensational conflict between Pagad and the Muslim religious establishment came on Friday 10 January 1997, when a 50-strong Pagad group, watched approvingly by its balaclava-masked amir, invaded the Muir Street mosque during the mid-Friday prayers before Ramadan, to abuse and manhandle the congregation’s Sheikh Mogammad Moerat and his family. The MJC issued a statement expressing:

…our strongest condemnation of the abhorrent behaviour. This constitutes a violation of the sacred time of Ju’mah, the sacred space of the masjid, and the sacred person of an individual, and calls for the highest censure.

The MJC condemned Achmat Cassiem, leader of Qibla and the Islamic Unity Convention (IUC), and Radio 786 as responsible for creating an atmosphere of belligerence and intolerance. They violated Shari’ah by demonising Muslims who hold alternative viewpoints as munafiqs (hypocrites). Sixty-two imams, moulanas and sheikhs signed the statement, supported by the Muslim Youth Movement.

Pagad activists manhandled, spat at, and called “hypocrite” and “pig” Sheikh Achmat Sedick, Secretary-General of the MJC. Pagad leaders now spoke of “economic gangsters” and “religious gangsters”. After criticising Pagad’s methods, Sheikh Nazeem Mohamed, a much-loved leader of the MJC for forty years, and then its president, had a hand grenade thrown at his house in mid-1998. Also publicly critical of Pagad’s methods was Ebrahim Moosa, a liberal Muslim academic theologian, Director of the Centre for Contemporary Islam at the University of Cape Town and among the first Muslims to be appointed in that department. The day after Pagad’s legal spokesman denounced him as an enemy of Islam (munafiq), which was reported on Radio 786, a bomb was thrown at his house. The bomb attack was preceded by a Pagad trademark, the balaclava-clad squad, who in this case made a road-block keeping people away while the bomb was planted. Pagad leader Abdus-Salaam Ebrahim denounced Moosa as a “religious gangster”. Moosa moved himself and his family to the USA. Many other imams, from Mountain View to Surrey Estate to Grassy Park congregations, had to endure aggressive confrontations from Pagad leaders and supporters. This echoes how Qibla had earlier during the 1980s alienated one congregation after another.

As for Nelson Mandela, Cassiem says he is nothing but a sellout. Here he is in 1996:

Cassiem, 50, opposes the idea of a negotiated settlement as a corrupt sellout by Mandela’s African National Congress African National Congress (ANC) and an insult to all who suffered to defeat apartheid. The government, therefore, is an illegitimate one, he says.
…
“We love justice more than we love peace, for peace emanates from justice,” Cassiem said. “The struggle will continue toward that.”

Unsurprisingly, some of his most poisonous rhetoric is reserved for Israel. He wants to see it annihilated:

A major principle has evolved through centuries of armed, struggle against oppressors worldwide; that it is irrational, illogical, and obscene for the oppressors to tell the oppressed how they should respond to their own oppression. We endorsed that principle here in South Africa, and we endorse it on behalf of the Palestinian people. This means that the Zionist Regime, its lackeys and supporters cannot, may not and should not be allowed to propose any solutions. This would specifically exclude the idea of a two-state solution: that is, a Zionist State and a Palestinian State existing side by side on the land of the Palestinian people. Tova Herzl [israeli ambassador] frequently mentions that the Zionist State is only the size of the Kruger National Park; our position is that even if the Zionist State is the size of a postage stamp it has no right to exist.

Occupied Palestine must be decolonized, deracialized and restored to the Palestinian people as a single sovereign state. In plain English, the Zionist State must be dismantled.

The Jews known as the Neturei Karta International believe Israel must be dismantled peacefully; we are sure that if that is possible the Palestinian people will welcome it with open arms.

Even the most disgusting forms of antisemitism are defended by Cassiem’s followers. Consider this story about Radio 786, a radio station controlled by the Islamic Unity Convention (IUC), which is led by Cassiem:

In 1996, Radio 786, a Muslim radio station, had to apologize for airing an interview with Dr Ahmed Huber who spoke of the ‘Holocaust swindle’. Two years later the same radio station interviewed Dr Yaqub Zaki who, besides claiming that the “million plus” Jews who died in the Second World War had died of infectious diseases, spent much of his time engaged with elaborate Jewish conspiracies, including a bizarre connection between Jewish financiers, the Boer War, Alfred Milner and Zionism. In June this year (following an eight year legal wrangle brought by the Jewish Board of Deputies against the radio station and lengthened by technical disputes) the Independent Broadcasting Authority found Radio 786 guilty of contravening its broadcasting codes.

Determined to stand up for Jew hatred, the IUC appealed the broadcasting authority’s judgment at the Constitutional Court. It lost (pdf).

The Islamic Unity Convention (IUC), the owner of Radio 786, suffered a major setback when the Constitutional Court dismissed on all counts its application to strike down certain provisions in law. The application was the latest attempt by the IUC to prevent the implementation of sanctions imposed by the BMCC against Radio 786 following a complaint by the South African Jewish Board of Deputies (SAJBOD) against a station.

Mervyn Smith, who heads SAJBOD’s legal team in the matter, said that the case was not about constitutional technicalities but about the refusal of Radio 786 to publicly acknowledge that the contents of the programme it had broadcast were offensive to the Jewish community and to apologise accordingly. “What this is really all about is the refusal by Radio 786 to accept that six million Jews were murdered by the Nazis and that denial of the Holocaust is deeply offensive to Jews. Were this not the case, then what has prevented the radio station from simply apologizing to the Jewish community and acknowledging the truth?” Smith said.

The US too must be fought. Here is Cassiem on the 1993 World Trade Center bombers:

Following the sentencing of those involved in the 1993 New York “Day of Terror” plot, Cassiem and the IUC penned an open letter to President Clinton that demanded “the immediate and unconditional release” of plot mastermind Shaikh Omar Abdel-Rahman and “all those sentenced with him.”

Qibla, an Islamic organisation based in Cape Town, home to many Muslims, reportedly threatened on Monday that it was considering retaliatory action against the US.

This is from a 2004 report on antisemitism in South Africa:

After 9/11, however, the organization announced that it had recruited fighters to send to Afghanistan. The IUC is an umbrella organization for over 250 South African Muslim groups, and is believed by some to be a front for Qibla. Both groups are headed by Ahmed Cassim, who was inspired to found Qibla by the events of the 1979 Iranian revolution.

Here he is on Hitler fan Yusuf al Qaradawi’s Islam Online in 2005:

And in the contemporary situation it is again the Muslims in Iran, Afghanistan, Iraq, Chechnya, Lebanon, Algeria, Egypt, and Palestine, etc. who are successfully rising up against the superpowers.

Achmad Cassiem’s disgusting politics and advocacy of terrorist violence should have no place in this country. He should be banned from the UK.

Here is another measure of the depravity of the IHRC. Merkavim, an Israeli company, makes armoured buses in partnership with Volvo. They just might be, well, necessary in Israel. For the IHRC, though, protecting Israeli bus passengers is just so unfair. They are urging people to harass Volvo with threats of boycotts if it does not drop Merkavim.

Evil Israelis at work, helping to protect bus passengers from terrorist attacks. How dare they.

Why not drop a line of support to the Volvo office the IHRC has targeted?