Back in 2006, Harry’s Place picked up a post from Pickled Politics asking if anyone knew this man.

Sunny thought that he had managed to get an Iranian protestor, Reza Moradi, arrested for carrying a placard bearing one of the Danish Mohammed cartoons, at the March for Free Expression that had taken place in Trafalgar Square the previous weekend. Nobody knew who he was, but plenty of people started noticing him in all sorts of places. Here he is, on the pro-Iranian Quds Day march in October 2006: 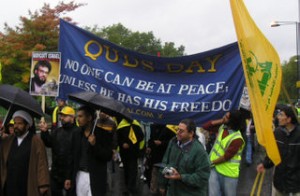 And here he is again, this time at the Salute to Israel parade in London in June 2008: 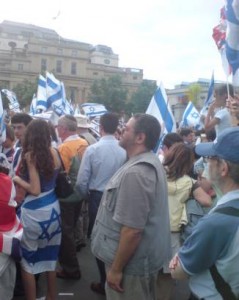 Perhaps he couldn’t make up his mind whether he should be a Khomeinist or a Zionist; or perhaps, just like at the March for Free Expression, he was doing his public duty just in case any more people needed reporting to the police.

Well it turns out that he is indeed a Khomeinist, and his name is Abbas Panjwani. Here he is, at a conference in Indonesia last year (you have to scroll down): 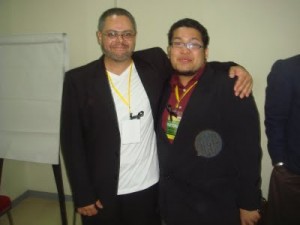 Panjwani spoke in the session titled: “What can Indonesia society do for supporting peace in the historic Palestine within the basis of Palestinians Right of Return?” There is another photo of him here, although it is wrongly captioned: 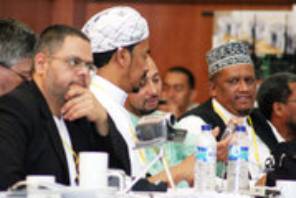 The conference featured an impressive list of speakers: our very own Daud Abdullah, Massoud Shadjareh and Stephen Sizer; Sheikh Ali Daamouche and Mustafa Haj Ali from the Hizbollah leadership; Australian Holocaust Denier Frederick Toben; and what anti-Israel conference would be complete without a couple of speakers from Naturei Karta? 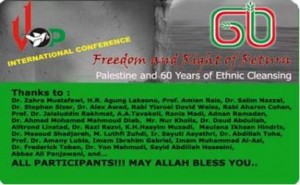 (The more observant amongst you will spot that Abbas Panjwani’s name has been spelt incorrectly on this label).

Abbas Panjwani runs a website called Innovative Minds. It is a curious hybrid of computer goods for sale, Khomeinist propaganda and anti-Israel agitation. For example, the website sells a CD-Rom of the Art of the Islamic Revolution:

Undoubtedly the single most significant success for the Muslim Ummah this century is the Islamic Revolution in Iran. Even non-muslims recognise this, the famous post-modernist scholar Michel Foucault described it as “a revolution of the spirit in an age without the spirit”.

Now for the first time experience the Islamic Revolution through the glorious art it has inspired. Nearly 200 paintings spanning two decades of the Islamic Revolution are presented here. Set against a musical score, this multimedia feast is guaranteed to move your soul, and open your hearts and minds to the gift Allah has bestowed on us in our life times.

Here is an example of the art on offer: 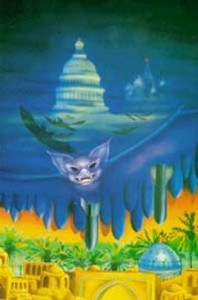 It is captioned “The Vampires of the West and East all feeding on the Muslim Ummah.”.

Another CD sold by Innovative Minds is their “Islamic Fun” childrens’ games compilation:

”Your child will learn about Islam by playing lots of exciting games, full of colourful animations and cute sounds effects. Six different games to choose from, with lots of levels – each time they play its different – lots of fun!”

One of the games on the Islamic Fun CD is called “The Resistance”:

A British company is producing an educational CD-Rom that encourages Muslim children as young as five to “kill” Israelis.

The CD, called Islamic Fun!, is being sold for £19.95 from a suburban home in Crawley, West Sussex. One of the games on the disc, obtained by The Independent on Sunday, is called The Resistance and tells children playing it: “You are a farmer in south Lebanon who has joined the Islamic Resistance to defend your land and family from the invading Zionists.”

Players procure ammunition to fire at Israeli tanks by answering multiple choice questions and then firing at the Israelis as the tanks roll across the screen. There are three playing levels: for children aged between five and seven years, those aged eight to 10, and the hardest level for children aged 11 and over.

Questions include “What was the crime of the Jews of Khayber?” and “Who said: ‘I know I have been elected thanks to the votes of US Jews. I owe my election to them. Tell me what I have to do for the Jewish people’ to Ben Gurion?”

Abbas Panjwani, the director of the company Innovative Minds, which produces Islamic Fun! said: “The game does not target any human beings including soldiers, it targets Israeli tanks. From that point of view it’s no different from any other war game. It does not target any religious or racial group including the Jewish community. In fact its educational content teaches children the difference between Judaism and Zionism.”

Most of the Innovative Minds site is dedicated to the campaign to boycott Israel, supported by fatwas from such luminaries as Imam Syed Ali Khameini and Sheikh Yusuf al-Qaradawi. Panjwani’s protests that his website only targets Zionists, not Jews, is undermined by much of its content, and Qaradawi’s fatwa is a case in point:

“If every Jew in the world thinks himself a soldier, supporting Israel as much as he can, surely every Muslim using his very soul and wealth is a soldier to liberate Al-Aqsa… If the consumer buying Jewish or American goods is committing a major sin, surely the merchant buying these goods and acting as an agent is the greatest sinner.”

Innovative Minds carries reports of pretty much every major anti-Israel demonstration in London, which is presumably why Panjwani can normally be seen at them, camera in hand. He takes good pictures, too. Here is a delightful one from his report of the 2001 Quds Day march: 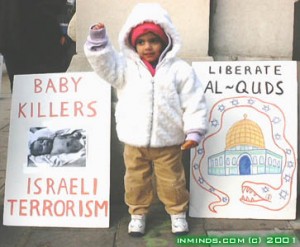 Note the Stars of David on the Jewish snake encircling the Dome of the Rock; a common antisemitic motif.

The Innovative Minds site includes a wealth of articles about all things Israel-related. It has just about everything that the anti-Israel campaigner could ever need:

– Here is Gilad Atzmon, on ”The clear cabal of Zionists who were fully engaged in transforming British politics into an internal Zionist affair.”

An investigation into ”The “Kosher Nostra Scam” on the American Consumer”.

And a paean to Ayat al-Akhras, one of the first female Palestinian suicide bombers, who killed two people and injured 22 more in Jerusalem in 2002.

So, Reza Moradi – now you know.