An Iranian Revolutionary Guard website has posted photos of pro-democracy protestors and asked informers to identify them. Numbers 1 and 19 are stamped “Identified.” 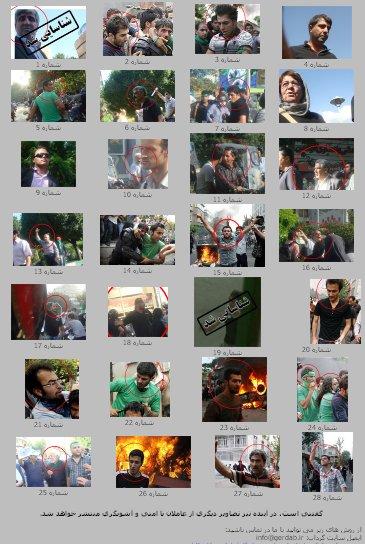 Now I can’t be entirely certain, but I think that number 2 is George Galloway, number 4 is Seumas Milne, number 5 is John Wight, number 8 is Yvonne Ridley, number 15 is John Pilger and number 27 is Hugo Chavez.

I have duly reported my suspicions to the Revolutionary Guard at info@gerdab.ir. I encourage you to report similar suspicions– the more often, the better.

Please note that number 14 is the famous photo of an opposition demonstrator helping to rescue an injured policeman from an angry crowd. I assume they want to give him a reward or something. Number 22 appears to be engaged in the counterrevolutionary act of giving someone a haircut while wearing a green shirt.

Can anyone translate the wording?

Update: And here’s another page from the same website.