In today’s Times there is an open letter from the daughter of one fallen British soldier to the daughters of another:

I was busy sorting out the washing and unpacking after a holiday in Greece when I heard of the death of your father, Lieutenant-Colonel Rupert Thorneloe, aged 39. Whenever casualties in Iraq or Helmand are mentioned, my antennae are primed. Fears of hearing a familiar name are rarely justified but this time, they were.

We met your parents at a party some months ago. Your father was heading to Afghanistan soon afterwards and, like every professional soldier, was clearly looking forward to taking his troops of the 1st Battalion Welsh Guards on operation.

It is every soldier’s goal to lead his men into battle and the men at the party, some of whom had served in the Army but seen nothing to compare with the action faced in Afghanistan, talked to him animatedly about what he might expect. A little envious, perhaps. Above all, he said that he was concerned to bring his troops back safely, and at the same time was anxious about leaving you and your mother at home, aware of the risks.

It did not seem fair to question your mother about whether she was frightened of what might happen or whether she had considered that he might not return. Instead, she and I discussed you and your sleeping habits and whether our toddler upstairs was screaming because she was afraid of the dark or of being in a strange house with lots of noise. Mundane maternal worries.

I was nervous, though, because 30 years ago my father, David Blair, was killed in action in Northern Ireland by the IRA. Like your father, he was proudly commanding his regiment, the 1st Battalion Queen’s Own Highlanders. He was on a short tour of Ulster before being posted to Hong Kong.

He died, along with Lance Corporal Victor Macleod and 16 other soldiers from 2 Para, at Warrenpoint on August 27, 1979. Soldiers had been killed by a roadside bomb and he had gone to investigate. Nineteen minutes after the first blast, a second bomb was detonated, killing my father and several others. He had just turned 40 and is still the most senior British Army officer to have died in Northern Ireland.
…
Having died so young, at the height of his career, Rupert Thorneloe will always be remembered. For decades to come, old soldiers will want to meet you and regale you with tales from when they and your father were on operations together, and tell you how much they loved him. 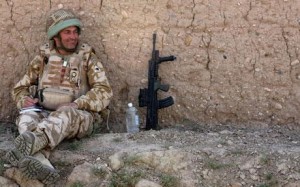 Now there are some people in Britain who actually support the killing of British troops.

Anas al Tikriti, a prominent Islamist, is one of them. For him al Qaeda is bad, but killing “occupying” soldiers is good. This is from an “exclusive statement” he made in July 2006 to the Muslim Brotherhood’s website:

He considered as naive and close minded those who restrict the resistance to the use of weapons, saying that the political, economic, and commercial and media as effective means of resistance.

Al Tikriti asserted that the sincere Iraqi resistance has distanced themselves from Bin Laden’s statements and said that it lays its focus only on the resistance of the occupation.

Al Tikriti deplored Al Qaeda’s attitude, saying that the number of the Iraqi people killed by al Qaeda is ten fold as many as the number of American soldiers killed by this organization.

Al Tikriti is scheduled to appear at a conference in the House of Lords this evening:

Society Outreach would be delighted to invited you to a conference on:

Post-Obama Speech: The Challenge is translating words to deeds
“Sit and wait” will not end the occupation or bring Peace!

Distinguished members of the panel include:

Al Tikriti’s presence in the House is grotesque and a disgrace.