Today’s the day.  This poster has gone up around New York featuring a white Barack Obama and a black John McCain in an effort to remind voters to put the issue of race to one side. Let’s hope that they can. 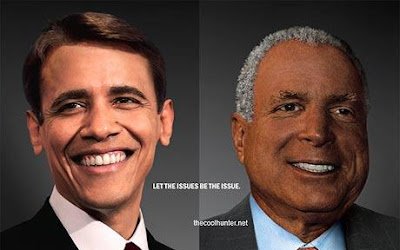 The poster was created by New York ad agency Grey and features the slogan “Let the issues be the issue”.

The agency’s chief creative officer Tor Myhren, said: “This is a non-partisan image. We wanted to address the race issue straight on. And it cuts both ways. If you’re hopping on either candidate’s bandwagon solely due to the color of their skin, you’re voting for the wrong reasons.”

With Obama seven points clear, I’m pretty sure we all hope around here that he wins this election and takes America forward.

There are still rumblings about the Bradley Effect, but the enthusiasm and high turnout, particularly among many young voters, black and white, should put paid to that and ensure an Obama victory.