The former Revolutionary Guard had boasted that he had been awarded an “honorary degree of law” by the University of Oxford. Not so, cried his critics. So, to silence his doubters, Kordan released the certificate confirming his degree: 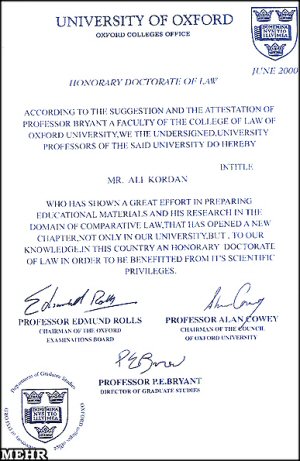 Well, that looks genuine enough. It has an Oxford University crest on it, and signatures and everything.Unfortunately, Alef News Agency, which is aligned with Korban’s political opponents, sent the certificate off to Oxford University, which responded with the following statement:

The University of Oxford has no record of Mr Ali Kordan receiving an honorary doctorate or any other degree from the University.

The document that has been made public is not a genuine University of Oxford degree certificate.

The Ministry of the Interior immediately responded by procuring the censorship of Alef. But the game was up. Kordan could no longer maintain that the degree was genuine. Here’s his explanation of why he honestly, genuinely, truthfully believed that he was the holder of an Oxford degree:

In a letter to the president on Saturday, Ali Kordan said he had pressed charges against the person who claimed to represent Oxford University in Tehran as soon as he realised his degree was fake…

“Over the past eight years, I never doubted the validity of the degree and that’s why I presented it in the course of the confidence vote,” Kordan wrote in his letter to President Mahmoud Ahmadinejad.

The minister, who was appointed in August, said he approached Oxford University after MPs cast doubt on his degree, but “to my utter disbelief, the university did not confirm (the degree) when my representative went there”.

This presented a bit of a problem for Ahmadinejad. Iran’s constitution requires that his entire cabinet be approved by Parliament if more than half the cabinet ministers are replaced. Ahmadinejad has replaced nine of 21.  Accordingly, the President opposed impeachment: on the grounds that it was illegal because the Minister had not “commit[ted] the offence while in office”.

The dispute over Kordan’s fake degree triggered a fistfight last week when the director of the presidential liaison office in parliament, Mohammad Abbasi, handed out checks for $5,000 to lawmakers who signed a letter stating that they would not vote for the impeachment.

When lawmaker Ali Asghar Zarei confronted Abbasi, a fight broke out in which the presidential liaison was injured. Zarei is regarded as one of Ahmadinejad’s most loyal supporters in parliament.

“Collecting these signatures was against morality,” Zarei said later, according to the semiofficial Fars News Agency. “I confronted him to prevent violations and wrongdoings that are contrary to the policy of the government.”

Abbasi was fired and banned permanently from the Parliament building.

You’d never catch a prominent British politician involved in anything like this, of course.

UPDATE: He has gone