Taking a leaf from his friends in the Islamic Republic of Iran, Hugo Chavez’s electoral council has moved to ban nearly 400 mostly-opposition candidates from state and local elections in Venezuela next November.

As Jackson Diehl writes in The Washington Post, the council acted on the advice of a Chavez appointee, who ruled that “each of the candidates was guilty of an administrative or legal offense, though none has been judged in court… [T]his straightforwardly violates the Venezuelan constitution as well as the Inter-American Democratic Charter; both say a citizen cannot be stripped of political rights unless he is convicted of a crime and sentenced by a judge.”

Diehl focuses on the case of one of the candidates on the banned list: Leopoldo Lopez, the 37-year-old mayor of central Caracas, who is running for mayor of the capital district.

López, a hyperarticulate graduate of Kenyon College and Harvard, is a pragmatic center-leftist, like most of the presidents elected in South America since the turn of the century. He won his last election in the Caracas district of Chacao with 80 percent of the vote. An opinion poll taken this year showed his popularity rating at 65 percent in greater Caracas, compared with 39 percent for Chávez; nationally, he beat Chávez 42 percent to 41. In the upcoming election for mayor of the capital district — the most important elected post in the country after the presidency — López leads the Chávez-backed candidate by 30 points.

…The charges against López, never tested in court, are a blatantly bogus concoction. One concerns a supposedly improper contribution he made to a judicial advocacy organization nine years ago, before he was elected.

On a recent visit to the US, Lopez made his case to a sympathetic Barack Obama: “We are being obstructed because we can win. We have the votes and the government knows that. If it allows us in the race the myth that Chávez is the sole representative of the poor masses of Venezuela will be destroyed. So they are trying to force me out.” The meeting created outrage in Venezuela’s pro-government media. 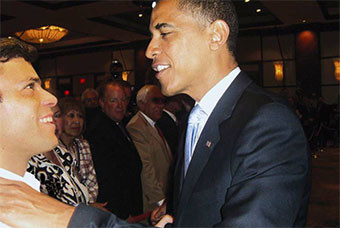 Now I’ll admit to knowing nothing more about Leopoldo Lopez than I read in Dielhl’s piece. He may in fact be tool of Venezuela’s anti-Chavez oligarchy– or, for all I know, an agent of US or Zionist imperialism. But if that is the case, surely the Venezuelan masses would reject him in a fair and open election. What is Chavez afraid of?