Yes, I know hand-holding is an Arab custom among close friends, and one shouldn’t read too much into it. But what kind of message does it send to brave Saudi dissidents and others fighting for democracy in the Middle East when the President who has spoken so eloquently about the advance of freedom does something like this with the ruler of one of the world’s most repressive regimes? 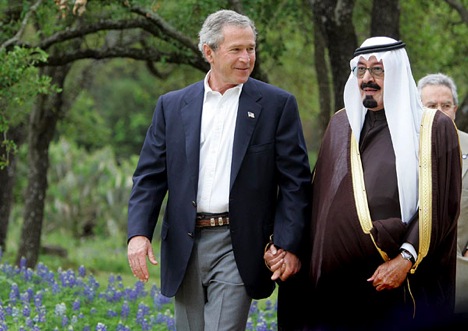 A White House spokesman said Mr Bush and Prince Abdullah had discussed the Middle East peace process, the need for democratic reform throughout the Middle East and progress in the war on terrorism.

Well, I’m glad Bush got the word “democracy” (or some variation thereof) into the conversation somewhere. Whether Abdullah returns home feeling any serious pressure to ease his autocratic rule is another matter.