It is always disturbing when a lawyer is prosecuted and convicted for activities engaged in during the course of acting for unpopular defendants.

Critics often unfairly – and cynically – hint that lawyers who perform, professionally, the essential task of representing clients with extreme and obnoxious political views are in fact their active sympathisers and supporters. Simply making such an accusation discourages lawyers from taking controversial cases, and potentially denies defendants – innocent until proven guilty – of access to a proper choice of counsel. It certainly used to be said that it was difficult to find able counsel to take on terrorism cases in Britain in the 1970s, because of the perception that such a defence would damage the advocate’s career prospects. If true, this period was a shameful one for British lawyers.

There are many lawyers, of course, whose personal politics are in fact extreme, and who have built their practice around defending unpopular, politically motivated criminals. They may sympathise with the politics of those they defend, or they may not. But ultimately, it does not, and should not matter. It should not even be a matter of comment: an advocate is an officer of the court, a professional performing a task of central constitutional value. To smear them for performing this role is disgusting, disgraceful and dangerous. It is not unknown for defence lawyers to be murdered because of the unpopularity of their clients.

But how much more disturbing is it, for a lawyer to act as a conduit between a terrorist leader and his followers?

Lynne Stewart’s defence – that when she communicated orders and messages from Sheik Omar Abdel Rahman in breach of the law, she was merely “part of a legal strategy that involved provoking the government if necessary in order to keep the sheik in the public eye” – was no defence. Indeed, it was barely credible.

We can only guess at her true mindset: but its not far fetched to conclude that she had simply crossed over into active collaboration with murderous islamist terrorists. 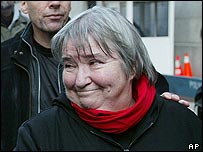