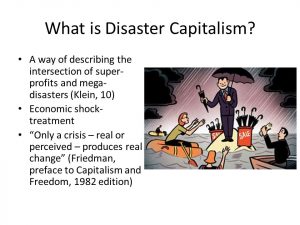 
Naomi Klein’s 2007 book The Shock Doctrine: The Rise of Disaster Capitalism describes how the capitalist global elites exploit disasters to implement policies to enrich themselves at the expense of the rest of society. What the author didn’t foresee is that just over a decade later, many on the left would become handmaidens helping – rather than hindering – globalists in bringing about those policies.

(Full disclosure: Klein and I attended the same elementary school in Montreal – Jewish People’s School – though not at the same time, as I’m 15 years older than she is.)

Klein is married to Avi Lewis, a scion of Canadian left royalty: his father Stephen Lewis, was leader of the Ontario New Democratic Party (NDP). His grandfather, David Lewis, was leader of the federal NDP and was much respected by his own party and by his political adversaries as a fiercely anti-Communist social democrat. Avi, however, is a more radical leftist, infamous for a train wreck of an interview he conducted with Ayaan Hirsi Ali, during which he expressed disbelief for her (incorrect, according to him) opinions on America and Islam. (Note: It’s an object lesson in how NOT to do an interview with someone smarter than you. She made mincemeat out of him, and it’s well worth watching)

Publication of The Shock Doctrine followed the enormous success of her first book, No Logo: No Space, No Choice, No Jobs. Published in 1999, shortly after the Seattle WTO protests that kicked off the anti-globalist movement, No Logo made her a household name among those of a left persuasion, and became one of the bibles of the anti-globalization movement.

In The Shock Doctrine, Klein puts forward the idea that disaster capitalism occurs when capitalists come to an area following a catastrophic event such as war, revolution, and natural disaster, when the population is in a state of shock, and take a major role in whatever reconstruction is required, which may involve governments making policy changes for their benefit. Examples of such interventions include:


*The Iraq War, which allowed Oil companies like British Petroleum and Shell to lay claim to Iraq’s oil reserves.

*Hurricane Katrina, which led to the closing of public housing, schools and hospitals for low-income residents and replacing these with private businesses, such as for-profit hospitals and charter schools.

*Tiananmen Square, which the Chinese leadership used to cement their neo-capitalist policies.

*The Great Reset proposed by the World Economic Forum (WEF), which many fear would transfer economic and political power from democratically elected governments to the globalist/capitalist class. It was announced in June 2020, when the shock of the pandemic was at its height.

And, of course, climate change, which also happens to be the subject of Klein’s most recent book, This Changes Everything: Capitalism vs. the Climate. According to Klein, the climate emergency is really about capitalism, not carbon, and presents yet another opportunity for disaster capitalists. However, she also believes the Left can exploit the “shock” from the climate emergency to radically transform our economic system.

This does seem to be what is happening; however, what Klein didn’t foresee back in 2007 is the exploitation of the left’s current obsessions – climate, to be sure, but also “equity” and “safetyism” — by capitalists/globalists to line their own pockets and ignore income inequality, even as the gap between rich and poor is larger than it has ever been and continues to grow.

The changing priorities of the left away from the concerns of the poor and the working class are in large part attributable to the changing demographics of those who now constitute the left: now mostly urban, middle-class, and university educated (people like Klein, in other words), and supported by a media whose demographics are pretty much the same.

On climate, globalist groups such as the WEF have been pressing for a new economic order that sounds a lot like the economic change advocated by Klein. However, many suspect the effects would be borne by ordinary people, while the elite capitalist class would retain all of its privileges. The optics of wealthy climate change enthusiasts attending meetings in gas guzzling private jets and limos does nothing to allay those suspicions. Nor does the talk about limiting travel and ending meat production, substituting meat protein with that of insects; after all, nobody believes that such measures would apply to the rich, famous and well-connected. But for the educated middle class that now constitutes most of the left, and for its supporting media, these concerns matter little compared to the climate “crisis.”

Equity concerns, especially with regard to race and gender, also matter more to the current crop of leftists than income inequality and the fate of small businesses, especially since Brexit and Trump’s election in 2016, and even more so since the death of George Floyd in 2020. We’ve all seen how large corporations make a show of their commitment to correcting these supposed inequities, all the while doing little or nothing to increase wages and improve standards of living for their workers. But those concerns are deemed to be “so 20th century” compared to ensuring every racial group, and every perceived gender is on some imagined “level playing field.”

Many of today’s Western leftists also adhere to a strange philosophy of “safetyism,” best exemplified by their support for the drastic measures undertaken by governments during the COVID pandemic. These measures enriched a small group of elites – notably Amazon shareholders – at the expense of thousands of small businesses – and the jobs they provide – which in the past would have been of concern to serious leftists. In the current climate, however, such concerns seem to matter little; leftists were – and in some cases remain – among the strongest supporters of strict government actions (e.g. lockdowns and school closures) to deal with the pandemic, and generally support de facto censorship to limit criticism of such actions, even when the education and lifelong prospects of children are at risk.

The result of this shift of much of the left’s priorities has ironically made many leftists the foot soldiers – some might say useful idiots — of the globalist elites. Despite all the progress made by the human race, especially in the developed world but increasingly worldwide, these proponents of drastic change to “save the planet,” “bring about equity,” and “make people feel more safe/secure,” demonize the scientific and industrial revolutions that have allowed humanity to flourish as never before and are using real or imagined crises to implement those changes, which play into the hands of the globalists that leftists like Klein are supposed to be against. That may not be a doctrine, but it certainly is quite shocking.