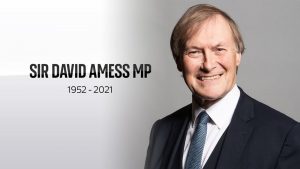 A British Member of Parliament, Sir David Amess, was killed on Friday whilst holding an open access meeting, known colloquially as a ‘surgery’ (1). He was 69 years old. A suspect remained at the scene, inside a Methodist church, and was detained. Amess had been stabbed multiple times and died despite efforts to save him. His presumed attacker is said to be in his 20s and of Somalian descent. At time of writing, no one has been charged with murder. That is as much as most media outlets have been prepared to go, though some have delved into a young man’s background in the United Kingdom, including photographs of residences and family details.

Motive is unknown and likely to be known only if a full trial follows. It is not by any means certain the motive will officially ever be made clear. That the Sir David was an honorary secretary of the Conservative Friends of Israel may or may not be germane.

By late afternoon, certainly by the time of the early evening news bulletins, his killing had been linked to that of Jo Cox M.P., likewise assaulted and killed by Thomas Mair on her way to attend a constituency surgery. They have been, as I wrote elsewhere, ‘linked at the hip’ by certain media outlets. Jo Cox’s murder was foul and obscene; so too was what we know of Sir David’s. But I contend they have been linked together for an ignoble reason.

Before Jo Cox’s killing there was continuous theme running through the left media and intelligentsia that the real threat to our democracy comes not from Islam but the right and always has and exacerbated by Brexit. The BBC is currently broadcasting a fictional account of far right activities in the 1950s; from the trailer – the only part of the series I have seen – Ridley Road is as crafted a period reconstruction of an era as British television talent can produce. It looks good. It covers the post war rise of an iteration of Oswald Mosley’s British Union of Fascists led by one Colin Jordan (his name fictionalised here I believe) battled by a combination of left and Jewish groups on the streets of a still war damaged city. In the U.K. the past is only revived to instruct the present. This includes now not just the fascist right threat but Brexit, to the left synonymous. To the self identifying metropolitan liberals the threat from the far right is frighteningly real and despite its epic flops at every test at the polls, increasingly powerful. This is a recurring theme of regular articles in what many consider the BBC’s running mate The Guardian. The message is the right is where we should be looking for the threat to our democracy and with trepidation.

There are right wingers like Mair; the known examples shuffled before the courts all share a similar profile: Males without the solace of companionship or sociability, frequently termed loners. They resist or cannot sustain for long collective action at any scale. The National Front Colin Jordan inspired was shunned even in places where its appeal might have been expected to succeed. The name change to the National Front, and its successor organisation, the British National Party and latterly Britain First (2) utterly failed to make any headway; a single councillor in an east London borough last century lasted six months. The linkage of the two killings seems to me to be specious and most likely by bias, unconscious or not.

Every Islamist attack is accompanied by public denial. Not solely from Islamists, though the various Islamic bodies, self appointed and unelected, that administer Islamic presentations on the national stage, making sure the record shows that they are the principle victims of all attacks notwithstanding, but from the British Establishment which, singularly, invented the much over used by necessity trope ‘religion of peace’ in the face of continuous expressions of this peacefulness and has sought to ensure Moslem’s in the U.K. are never asked to explain why their ‘community’ today provides the U.K., and overwhelmingly so, with its most urgent terror issues. Alone. Today the Moslem Council of Britain has issued warnings of threats towards Somalis based on ‘anecdotal evidence’.

So, more candles, prayers and we move on to the next outrage.