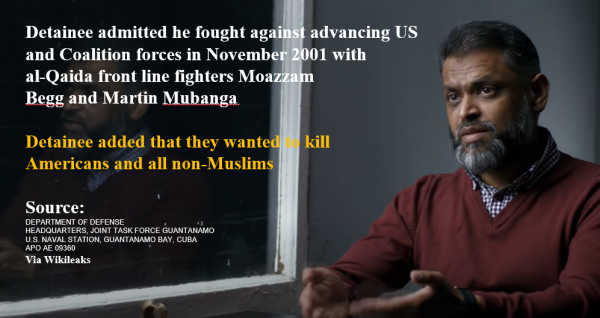 Former resident of Afghanistan & of Guantanamo Bay, Moazzam Begg discussed with a former captive of the Taliban, Yvonne Ridley the future of Afghanistan. The star of the show was meant to be Mullah Abdus-Salam Zaeef the former Taliban ambassador to Pakistan but he didn’t show up. Instead the two of them had a chat. Here’s some of what they said:

“There are so many people, who are traditionally supporters of anti-imperialism…who support the concept of fighting / defeating a foreign invader / occupier…why the reluctance of some people who are anti-imperialists to…welcome a Taliban victory and the withdrawal / defeat of the United States of America against a…poor group of people who are nowhere as advanced as them?” —Moazzam Begg (21:38–22:28)

“I’m a feminist, and I just don’t know how feminists around the world can wring their hands and bemoan the NATO forces leaving” —Yvonne Ridley (23:25–23:40)

“What I would do, if I was them [the Taliban]…I would get a rebuttal unit in place, to call out and factcheck every little bit of fake news that’s there” —Yvonne Ridley (33:22–33:36)

“They [the media] can’t bear to say anything nice…or anything…not even nice, just factual…about the Taliban” —Yvonne Ridley (38:42–38:55)

“Having seen how innovative and enterprising the Palestinians in Gaza are when it comes to [military] equipment and getting things up and running, I’m quite confident they’ll [the Taliban] probably do the same” —Yvonne Ridley, when asked by Begg about the US weaponry left behind in Afghanistan following withdrawal (45:19–45:35)

“I think that this is something that they [the Taliban] may have picked up in Qatar…to accept people’s differences, to respect those differences and to move on” —Yvonne Ridley, when asked by a listener about Taliban oppression of Hazaras (47:37–47:57) [Nine members of the Hazara minority were recently “tortured then massacred” by the Taliban]

“Last year, some of them [Taliban members] were invited to Sheikh Qaradawi’s home in Qatar, and you know, the Sheikh is…some people regard him as controversial…but he’s a great unifier, and…I’m sure his influence has been positive on the Taliban” —Yvonne Ridley, while discussing the Taliban’s approach to ethnic minorities under their rule in Afghanistan. Yusuf al-Qaradawi, aka. Sheikh Qaradawi, has an extensive history of antisemitism, once stating that Adolf Hitler put Jews ‘in their place’ and describing the Holocaust as, while ‘exaggerated’ by Jews, a ‘divine punishment’ (47:58–48:27)

“There’s a question by [a listener]…she says her concern is ‘what happens to our kids in the UK if they show support…for the Taliban’, that’s an interesting question because we know we’ve dealt with this type of thing over Palestine in the past” —Moazzam Begg (54:07–54:23)

“I just want to say one thing, for me, on a personal level…when I saw the images of the Taliban soldiers walking into Bagram, I broke down…memories came flooding back to me about what I witnessed there and what happened there in those years, and I’ve never been able to forget” —Moazzam Begg (1:03:55–1:04:17)

“I hope that we can be joined next time by Abdus-Salam Zaeef, and perhaps other members of the Taliban…perhaps [Taliban spokesperson] Suhail Shaheen” —Moazzam Begg (1:05:12–1:05:23)