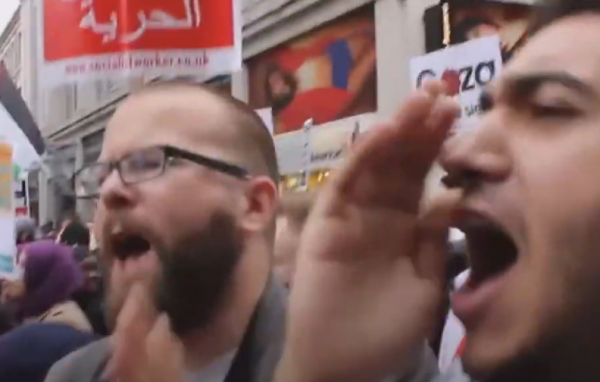 Academic Sai Englert recently wrote an article for Middle East Eye entitled “With this flawed antisemitism definition, Britain is closing down academic freedom”. It’s an unimaginative piece arguing against the IHRA definition on the basis that the “definition is attempting to silence international criticism” of Israel.

Englert, who is a lecturer at Leiden University in the Netherlands, is concerned; “the British state is happy to throw Jewish communities under the bus” he writes.

We are glad to see that Englert is so concerned with the wellbeing of Jewish communities.

It was therefore somewhat of a surprise (not really) when we stumbled across this little-known video of Englert chanting in support of Hamas rockets striking Tel Aviv. That’s right, the man so concerned with Jewish wellbeing is more than happy to lead a mob singing in support of rockets fired by a homophobic, antisemitic terrorist group whose stated aims are to ethnically cleanse Jews.