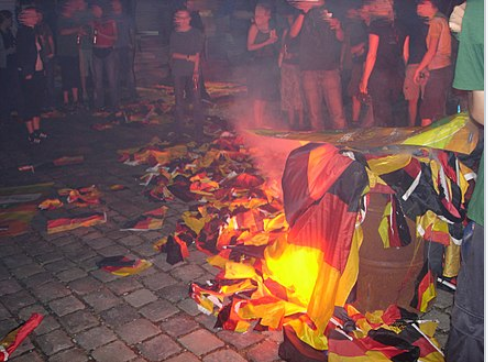 A headline I saw this morning – ‘Burning EU and other flags can now bring German jail term’ – raises all sorts of interesting questions relating to freedom of expression.

Completely unsurprisingly this story is being badly misrepresented by some. One alt-right pundit claimed that:

The EU is threatening to put people in prison for burning their cringe flag. This is the most important thing to pay attention to right now.

In fact the BBC headline was also perhaps unhelpful in putting so much weight on the EU flag’s role in the new legislation.  As the story itself makes clear, the Bundestag’s vote simply puts other national flags (including the EU one although it’s in a rather different category) on the same footing as the German flag.

The vote in the Bundestag (parliament) on Thursday makes defiling foreign flags equal to the crime of defiling the German flag.

My first impulse was to think that making this a crime punishable with up to three years in prison was something of an overreaction.  This response was then stress-tested by reading that the AfD made the same point:

The far-right Alternative for Germany (AfD) has condemned the new law as “excessive interference in free speech and artistic expression”.

It’s a difficult area – and different countries’ legislation offers a wide range of approaches.  I think the impact of flag burning varies a good deal according to context.  Certainly any public flag burning seems an aggressive and potentially hazardous act, and in this useful article it is noted that it has been prosecuted as disorderly conduct for these reasons, not political ones, in Australia,

My tentative feeling is that burning an EU flag is rather different from burning a specific country’s national flag.  While still an extremely aggressive and unwelcome act it would be aimed at a supra-national organisation rather than a particular country or, by implication, the people of that country.

At the other end of the spectrum, for me, is another example mentioned in the BBC report, the burning of an Israeli flag.

The move followed Social Democrat (SPD) complaints about protesters’ burning of the Israeli flag in Berlin in 2017.

Justice Minister Christine Lambrecht, a member of the centre-left SPD, said “burning flags publicly has nothing to do with peaceful protests”. She said it stoked up “hatred, anger and aggression”, and hurt many people’s feelings.

An excellent example of how hostility to Israel can be manifested in antisemitic forms was the burning of an Israeli flag outside a synagogue in Johannesburg in a protest led by Bongani Masuku.

Until this recent change in the law Germany, like many other countries, privileged its own flag. However my own instinct is to think that burning the flag of another country is potentially more serious as it could target a minority – the burning of Israel’s flag is one example, and burning a Turkish flag in Germany or perhaps the flag of Pakistan in India would also be a particularly charged act.

I’m more uneasy about legislation which targets the burning of a country’s own flag as a distinct crime, as it sometimes seems to come close to blasphemy legislation. For example this Brazilian law reminded me – although the procedure is different – of the religious guidelines for disposing of a copy of the Qur’an:

However this doesn’t mean that the act of burning a flag might not be used to help determine that a separate offence had been committed – perhaps stirring up hatred or public disorder.

In the US and Canada flag burning is protected as a form of free expression.