This is such an appalling letter – I felt the need to double check I hadn’t stumbled on a parody. 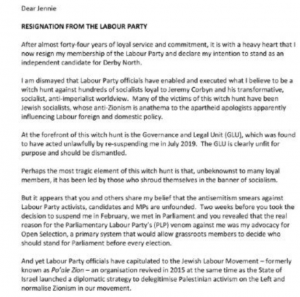 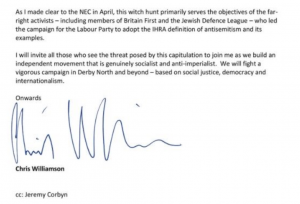 In a letter full of egregious moments I’ll pick out just one – his claim that the ‘witch hunt’ against him serves the interests of ‘the far right activists – including members of Britain First and the Jewish Defence League – who led the campaign for the Labour Party to adopt the IHRA definition of antisemitism and its examples’.  It’s a quite extraordinary perversion of the facts to suggest that these marginal and extreme groups, or any element of the ‘far right’, played such a role.

Williamson ends with an ironic echo of those Corbyn opponents who, in a spirit of satire or mischief, use the #ResignForChris hashtag on Twitter and urge Williamson fans to tear up their membership cards:

“I will invite all those who see the threat posed by this capitulation to join me as we build an independent movement that is genuinely socialist and anti-imperialist. We will fight a vigorous campaign in Derby North and beyond – based on social justice, democracy and internationalism.”

Derby North is a Labour/Conservative marginal …