Everyone was expecting Labour Party conference to turn Brighton into an antisemitic sewer. One of the few wins was convincing Waterstones not to hold the launch of the book Bad News for the Labour Party in their Brighton branch.

Waterstones should be breathing a sigh of relief that they haven’t sullied their brand name further by hosting the assorted bunch of cranks who attended that launch, eventually held at the Rialto Theatre.

Here’s what Mike Cushman of Jewish Voice for Labour stood up and said:

“I’ve always assumed that this smear campaign is based upon the excavation of a huge depth of twitter and Facebook posts now I don’t know about anybody else but I can’t find a twitter post I did a month ago let alone what someone else did six years ago.

This is not an amateur job to find this stuff it requires serious, heavyweight artificial intelligence.

Now there are obviously two targets of this campaign one is Jeremy Corbyn and the Corbyn project the other one is our ability to talk about Palestine.

I always naively assumed that the heavyweight IT behind this was coming from Tel Aviv from Mossad because that’s the sort of thing they do. But reading an article in the Off Guardian last week about the way The Guardian has been subverted and taken away from doing any investigative journalism by direct intervention by MI5 makes me begin to suspect that this mining that’s fed to people like David Collier is actually coming from the British security services in an effort to stop us from having a socialist government in this country because this is what MI5’s job has been for many, many years”

Heather Mendick, Labour Party liaison to the Jewish community, was there swallowing up the conspiracy theories without so much as a dissenting word. Hardly surprising bearing in mind that her, now deleted Twitter account was mentioned in a CST report detailing antisemitic hate speech on Twitter. Many of those in the room are members of Jewish Voice for Labour. Mendick has “shown solidarity with” JVL co-chair Jenny Manson & Chris Williamson in the past. 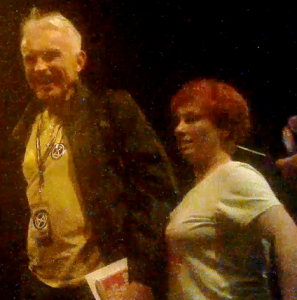 Prof David Miller of Bristol University spent some time defending Pete Gregson, a man who was too extreme even for Labour Against the Witchhunt:

“So what we’re talking about here is the banner that was removed by the police this morning, which isn’t there today, the banner of Pete Gregson which featured a cartoon with Jeremy speaking at a rostrum with the Palestinian flag on it and behind him Netanyahu in a jet firing missiles at him with the word defamation on the missiles and antisemitism as one of the weapons, and that was denounced by Jeremy on twitter this morning as being; “vile antisemitism I’m disgusted this banner was displayed near our conference centre this kind of anti-Semitic poison has no place whatever in our society” [audible complaints and shouts from the audience]

Now my understanding is that Pete Gregson is currently suspended by the Labour Party under allegations of antisemitism, it’s not my place to comment on those allegations and whether they are or are not justified but in this case Jeremy has effectively declared and intervened in a disciplinary process which is ongoing and I share your sentiments I am, I am, disheartened and when Jeremy comes out with that stuff who is there left who can stand up for the truth and for the fact that discussing Israel and Palestine is not the same thing as antisemitism?”

Perhaps Miller et al can take some solace in the fact that Jeremy doesn’t run his own twitter account however regarding Gregson, who wrote on his own blog; “I am guilty of “Accusing Israel as a state, of inventing or exaggerating the Holocaust”. It is the exaggerating part I admit to.” They’re up shit creek without a paddle.

According to the Herald Gregson was thrown out of the GMB Union for “his remarks, and abusive behaviour towards a female Jewish Labour member and union employee.”

How he has the stones to argue that a man who has written “Israel exaggerates the Holocaust for its own ends” brings a banner drawn by a man who came second in an Iranian Holocaust denial cartoon competition to a conference where he distributes leaflets featuring a lazer beam destroying Labour’s Jewish affiliate isn’t antisemitic one can only guess but clearly Miller doesn’t know antisemitism when he sees it.

This leaflet showing a laser weapon destroying @JewishLabour was distributed inside the conference centre at #Lab19. pic.twitter.com/vIETiLpOk8

“There is in fact of course in the IHRA definition one of the examples says if you confuse individuals and organisation with the Jews as a whole that is itself antisemitism. And I don’t want to talk about my own experience but I know that certainly many times people have had complaints about antisemitism in relation to them where it has been suggested that when they’re talking about Israel or the Zionist movement that what they really mean, secretly or unconsciously perhaps, is the Jews and we say well no, I wasn’t talking about the Jews I was talking about specific organisations in the Zionist movement who have made specific actions, things that I can point to and evidence, and so the point here that you’re almost unable to say anything significant, serious about Israel and its activities and indeed about the Zionist movement which supports Israel and its activities well what do we do? Well the only way for us to fight this is for us to fight it!

We are in a life or death struggle for the possibility of one; a moderately democratic labour party taking power in this country and 2; for the ability to campaign at all on Israel’s conduct in the occupied territories and elsewhere in the world.”

Apparently Miller thinks he’s in a life and death struggle to be able to campaign on Israel’s conduct in the occupied territories “and elsewhere in the world” (itself an antisemitic dog whistle), has anyone else noticed that campaigning for Palestine hasn’t been happening?

The whole event is available here for anyone who wants to have a listen. There are contributions from Tony Lerman and others, plenty of extra crankery to be had from a range of people who would be utter nobodies were it not for the determination of many in the Labour Party to ensure the least suitable people are promoted to the highest levels.