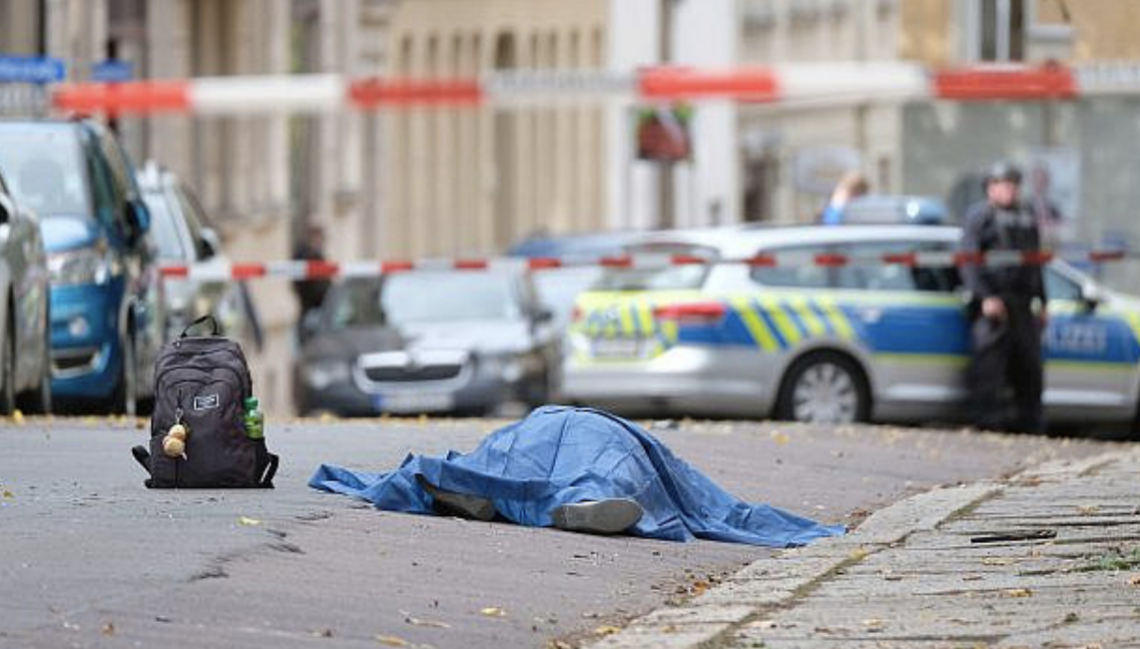 Two people were murdered by a right wing terrorist “loser” in the German city of Halle today on Yom Kippur.

The attacker’s target had been the synagogue but he failed to gain access to the building and instead killed whoever he found around him.

This is from an AFP report, full article here:

Parking in the leafy street by the high brick wall of the Jewish cemetery, the man who introduced himself as “Anon” is discouraged when he sees the massive wooden synagogue doors bolted shut.

When he fails to barge open smaller entrances, he lights the fuse of a home-made bomb and hurls it over the wall.

A shocked old man in a cap hurriedly turns his bicycle away as the shooter walks from the explosion.

After the door resists another bomb, a 50-something woman in a pink shirt, light scarf and glasses walks by, grumbling at the bizarrely-dressed attacker but apparently almost unfazed.

He levels an automatic weapon and fires a short burst into her back.

Further efforts to force the door prove useless, and after pitching more bombs and a molotov cocktail over the wall, he fires another, longer burst into the lifeless body of the woman lying by his car.

The murderer proceeded to find a target that would allow him to kill more and settled on a kebab kiosk where he killed one individual, shooting him with a shotgun at point blank range.

These truly are terrible times.

Note the below statements:

It’s devastating that people have been attacked near a synagogue in #Halle today, on Yom Kippur. The horrors of the past feel very present for many Jews, as antisemitism is again on the rise. I'll continue to do all I can to protect Jewish Londoners so they feel safe in our city.

This is a shocking and disgraceful attack during Yom Kippur, one of the holiest days of the year in the Jewish calendar.

My thoughts are with the injured and those mourning, and with Jewish communities in Halle and across the world.https://t.co/04VuYmrCKa

Today I spent three hours outside my synagogue providing security. It was cold and (save for the excellent company of one of my best friends) a bit boring but tragically it obviously wasn’t a waste of time.

Thank you to all the @CST_UK team & their volunteers who worked hard this yom tov to keep their community safe.