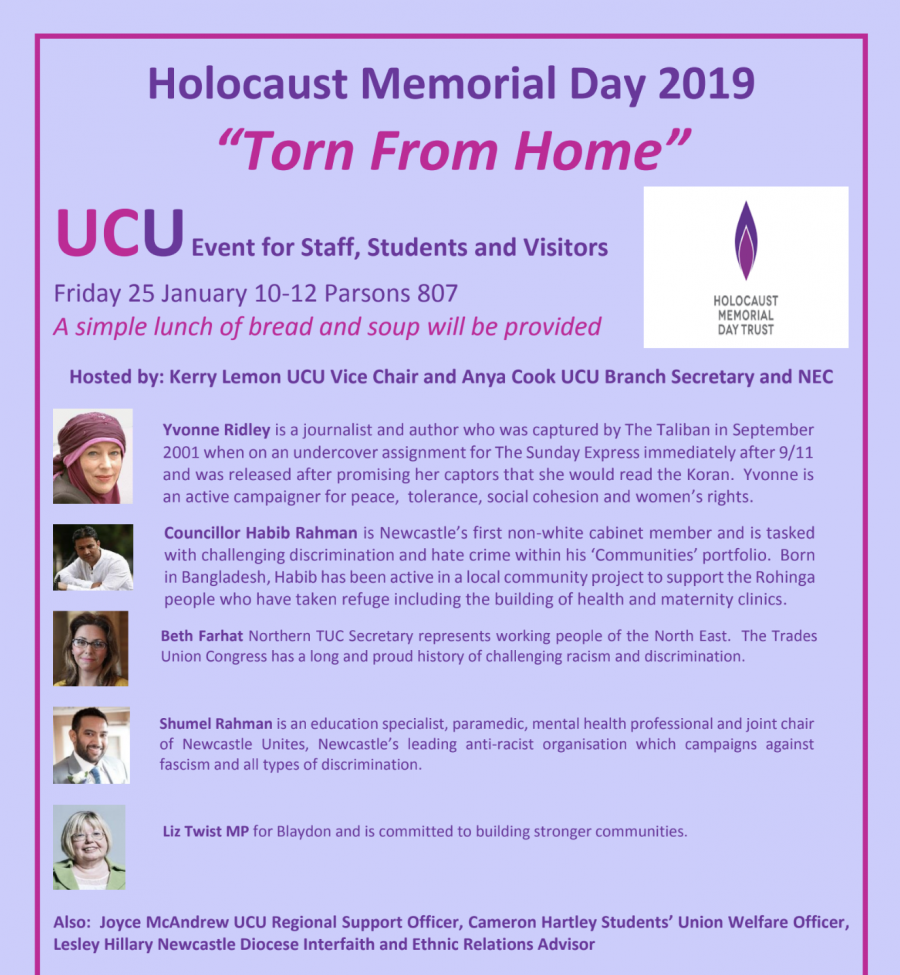 And speak she did, alongside local Labour MP Liz Twist:

The reason one might think Ridley is a strange choice is because of some of her past comments on the Holocaust: 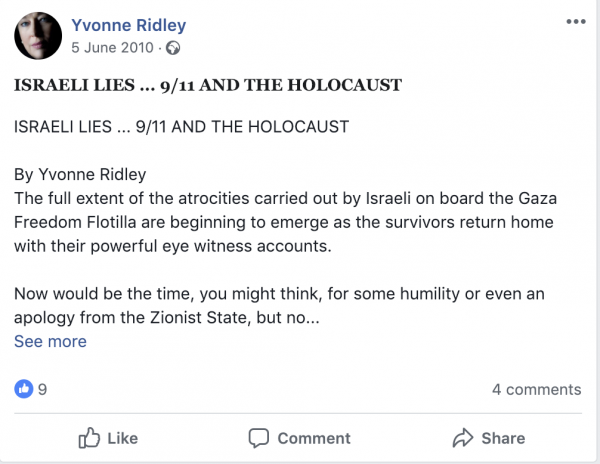 For those unwilling to read the full piece linked to above:

“What it also exposes is just how far Israel is prepared to go in its bid to deceive the world and justify its actions … even if it is at the cost of the memory of those blameless Jewish souls who perished in the Holocaust.

By invoking the Holocaust – a favourite trick of the Zionist State – we were all expected to recoil in horror and disgust and accept blindly the evidence put before us by these masters of mass deception. To even question would have exposed us to accusations of being anti-semitic.”

“Not content with insulting the memory of the Holocaust victims, Tel Aviv has shown it is prepared to exploit the deaths of those who perished in 9/11 … clearly nothing or no one is sacred.”

Although not listed on the official leaflet we can see that another speaker was Tony Dowling, his Twitter lists him as the Chair of People’s Assembly North East :

According to Dowling “if you’re a Jew join Jews for Justice for Palestine”. This was back in 2009, perhaps he doesn’t still seek to tell Jews what to believe any more. 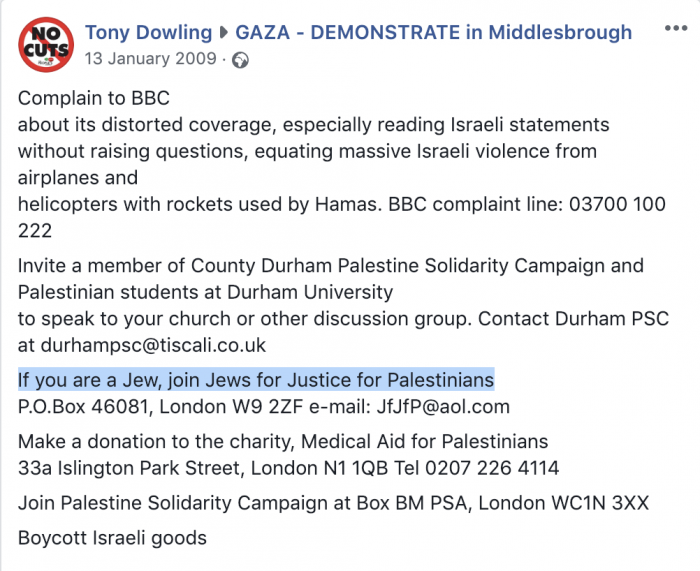 There is more underneath the surface here. Last October the Jewish Chronicle ran a story about a Dipu Ahad in Newcastle:

Mr Ahad was one of the councillors revealed by Buzzfeed News to be listed in a dossier compiled by the Labour Against Antisemitism group due to his comments and interactions on Facebook.

These included a post in 2013 that as a councillor he “DIDN’T vote for the new mega Marks & Spencer store in Gosforth as a matter of principal [sic]… Marks and Spencer are directly killing innocent Palestinian people by directly funding the Zionist regime.” Mr Ahad, who has been a Labour councillor for over a decade, also liked a post in 2015 which promoted the antisemitic conspiracy theory that Western countries went to war in Iraq, Afghanistan and Libya in an attempt to “achieve the Zionist [goal]… to have each country in the debt of the Rothschilds… there were six countries that didn’t have Rothschild and three were Iraq, Libya and Afghanistan.”

Ahad was head of the local committee responsible for organising Holocaust Memorial Day in 2014. A situation that led to the Jewish Lord Mayor, Jackie Slesenger, along with every other Jewish person quitting the committee, she wrote at the time:

I chaired the Holocaust Memorial Day Working Group for seven years and subsequently remained a member. It is composed of representatives from faith groups, schools and organisations in the city.

I would have continued to remain a member but for the unacceptable and unwise actions of the present chair, Councillor Dipu Ahad. During the Israeli/Gaza crisis this summer he chose to flout all rules of impartiality, fairness and racial tolerance by involving himself in pro Palestinian activities on council premises and elsewhere. In short, he brought Middle East politics into the city.

He was asked to consider his position and, when he refused to resign, I resigned and all the Jewish members including founder members of the HMD committee have also left.

In the wake of this Tony “Join Jews for Justice for Palestinians” Dowling wrote a letter attacking Slesenger:

It is disappointing that Lib Dem councillor Jackie Slesenger should be so lazy and careless in her
attack on fellow councillor and Holocaust Memorial Day committee chair Dipu Ahad (‘Harmonious
race relations are being damaged and may take years to repair’, Journal, November 15).

Although the threats of Islamophobia from far right groups like the EDL are very real, a report by
the European Muslim Research Centre shows that physical attacks on Muslims are linked to antiMuslim rhetoric of government and the media. Stop the War Coalition argued on its founding in 2001 of such consequences.

There is no contradiction in both supporting the rights of the Palestinian people and recognising the
injustice inflicted on the Jewish people in the horror that was the holocaust. But it is cheap,
disingenuous and deeply offensive for councillor Slesenger to imply that support for Palestine is
anti-semitic.

Councillor Ahad has a genuine record of standing against oppression in all its forms. He has visited
Auschwitz and attended international conferences against the holocaust and racism. And he has
organised and marched in Newcastle against both the Islamophobic EDL and the fascists of the
BNP & NF. He needs no lessons on campaigning for racial harmony.

There is no reason for Councillor Slesenger to either resign from Newcastle Holocaust Memorial
Day committee nor to criticise councillor Ahad. l hope she will reconsider her remarks and continue
to contribute to the committee’s valuable work.

Whatever course she chooses, however, Newcastle Stop the War Coalition, together with councillor
Ahad and all those committed to “harmonious race relations,” will continue to campaign for the
rights of the Palestinians AND against racism and anti-semitism wherever and whenever it occurs.

“Newcastle Unites is Newcastle’s leading anti-racist organisation. It is a small organisation, reliant on donations. The branch agreed a nominal donation in October and formally agreed to support their activity”

There’s something very rotten going on in Newcastle.

Ridley is returning to Newcastle on the 16 February to speak at an event titled THE GOOD.. THE BAD.. AND THOSE MUSLIMS. She says she’ll be speaking about antisemitism: 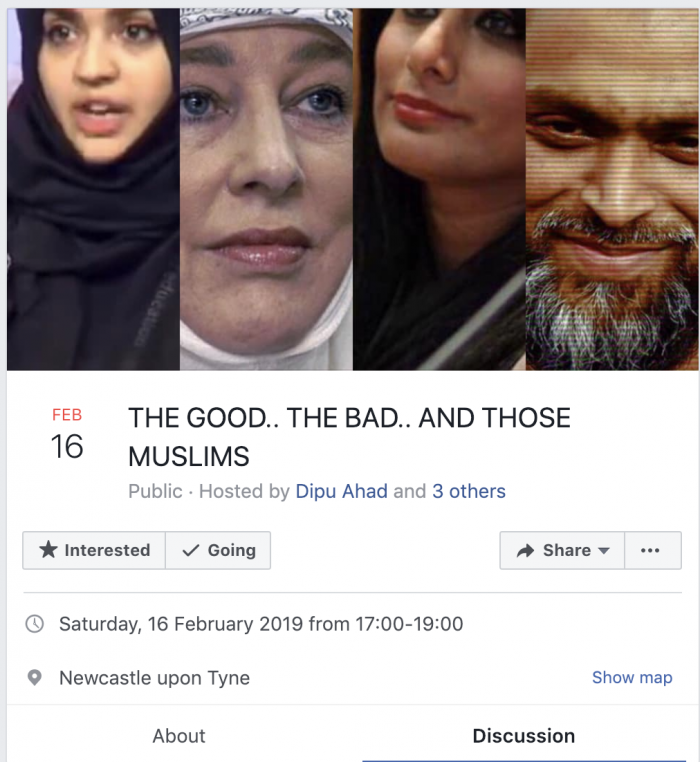 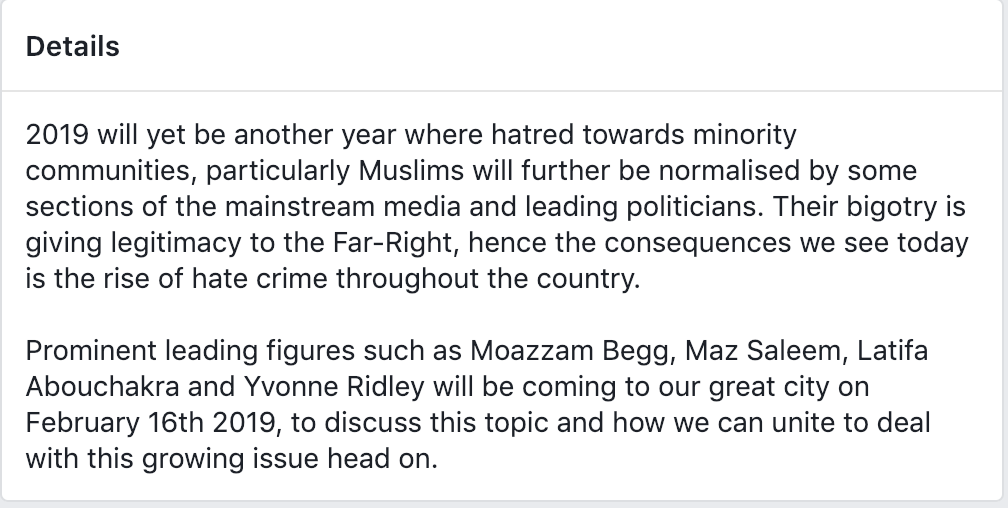 That great proponent of human rights Moazzam Begg will also be speaking.
One of the hosts of the event is Anya Cook, she was a Labour council candidate at the previous local elections. 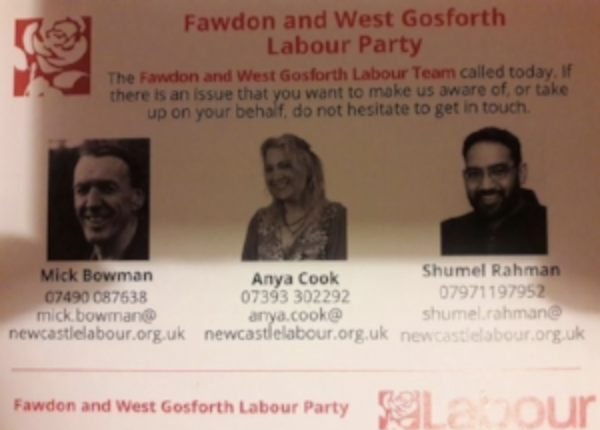 Two of the others hosts are Ahad and Dowling, of course.