Perhaps you remember this in May 2014?

The Liberal Democrat Friends of Palestine group has apologised after it repeatedly posted links to a website which promotes Zionist conspiracy theories and Holocaust denial.

The group posted a series of links on Facebook to articles on an American site called The Ugly Truth, which claims to highlight “Zionism, Jewish extremism and a few other nasty items making our world uninhabitable today”.

After being contacted by the JC, LDFoP administrator Miranda Pinch apologised and said she would not in future use pieces from the site, which also promotes allegations that Israel was responsible for the 9/11 attacks.

Ms Pinch, who is the daughter of a Holocaust survivor and converted from Judaism to Christianity, said: “I am always very careful about what I put on the page and I would never knowingly put anything that could in any way be seen as Holocaust denial.”

The Liberal Democrat Party has apologised after its Friends of Palestine group again posted antisemitic material on Facebook.

The group linked to a piece by antisemitic Israeli musician Gilad Atzmon which claimed “the time is ripe to cleanse British public life of Zionists and Jerusalemites”.
…
A Lib Dem spokesperson said: “That article was not, and is not the view of the party in any way. It was clearly inappropriate and offensive. We’re of course sorry if there was any offence caused.”

The LDFoP group removed the link and also apologised. 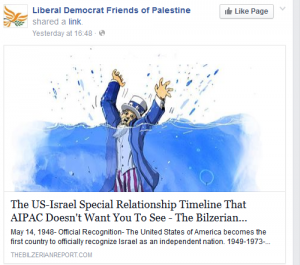 Uncle Sam is chained to a big stone that is dragging him beneath the waves. The stone is Israel.

See the article for yourself if you want. It includes this rubbish:

September 11, 2001-
…Five dancing Israelis were actually caught filming the world trade center attacks and dancing in celebration afterwards. When the Israelis were caught in a van that had contained explosives, they said we are all on the same side now against the Palestinians. The dancing Israelis later admitted on an Israeli talk show that they were there to document the event. Before the US government classified all information on Israel’s involvement in 9-11, the FBI officially concluded that Israel had to have known of the attack before 9-11-2001 and didn’t warn the US. After the attacks, Israeli Prime Minister Benjamin Netanyahu said, “We are benefitting from one thing, and that is the attack on the Twin Towers and the Pentagon, and the American struggle in Iraq.” He also said, “these events have swung American public opinion in our favor.”At best, Israel knew of the attacks before hand and did not warn America because of the strategic support against the Palestinians that it would bring. At worst, Israel had a hand in planning the attacks.

It takes seconds to figure out that the website is a far right antisemitic swamp.

From the home page one sees links to pieces titled “Why Do So Many Jews Hate Black People?”, “How Much Money Do The Rothschilds Have?”, and “Is It Fair To Compare Israelis to Nazis?”.

On the Holocaust, among other detritus there is this, on a page “defining antisemitism”:

Publishing contradictory material to previously accepted accounts of historical events, such as the Jewish Holocaust, is not anti-Semitism. Period. For example, questioning the number of Jews who died in the holocaust is a legitimate historical endeavor.

Liberal Democrat Friends of Palestine is a hate group with three strikes.