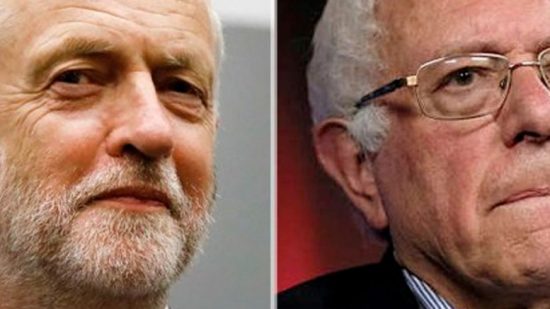 Bernie Sanders has a proud record both of supporting Israel and of being critical of its government. He summed up his views in a recent article for the magazine Jewish Currents, in which he wrote “I think it is very important for everyone, but particularly for progressives, to acknowledge the enormous achievement of establishing a democratic homeland for the Jewish people after centuries of displacement and persecution.”

The choice of the phrase “in particular for progressives” is deliberate. Because people on the Left, in recent years, have not acknowledged that the creation of Israel was, as Sanders put it, an “enormous achievement.” To the contrary, many view it as a tragedy – or worse, a crime.

And in a sentence that could have been directed at Jeremy Corbyn, he added: “It is true that some criticism of Israel can cross the line into antisemitism, especially when it denies the right of self-determination to Jews, or when it plays into conspiracy theories about outsized Jewish power.”

Sanders has been outspoken about not only Israel’s theoretical right to exist, but also its actual right to defend itself when under attack, most recently by missiles from Gaza. He has voted in Congress for American military aid to Israel. He has been outspoken in his opposition to the campaign for boycotts, divestments and sanctions (BDS) targetting the Jewish state.

His personal story would seem to ensure that he, unlike other politicians, could never be accused of being anti-Israel. He famously spent several months living on a kibbutz in Israel, and pointed to his experience there as one of the things that turned him into a socialist. He has visited the country, and has family there. He self-identifies as a Jew, and has spoken about family members who were murdered by the Nazis during the Holocaust.

And yet there are some right-wingers who are keen to pin the label of “anti-Israel” (or worse) on the Vermont Senator.

Here are some of the arguments they are making:

– Though Sanders has always supported U.S. aid to Israel, he has more recently indicated that he’d be prepared to leverage that aid as a way of pressuring the Israeli government to negotiate a peace deal with the Palestinians.

– Despite his well-known opposition to BDS, Sanders has been reluctant to support proposed legislation to criminalise advocacy of anti-Israel boycotts. He does this in part because of his strong commitment to free speech.

– And finally, even though Sanders himself rarely says things that are insensitive toward Israel and the Jewish community, some of his supporters have made remarks that clearly cross the line.

Comparisons between Bernie Sanders and Jeremy Corbyn on these issues reveal just how far apart the two men’s views are.

The Labour Party under Corbyn, for example, called for an arms embargo targetting the Jewish state; Sanders supports continued arms sales to Israel. Sanders opposes BDS, while the Palestine Solidarity Campaign – which Jeremy Corbyn fully supports – advocates for it. And while a handful of prominent Sanders supporters have expressed views about Israel that the Senator clearly doesn’t share, the ranks of Corbyn supporters included a large number of people whose opposition to Israel went far beyond a criticism of the Netanyahu government’s policies.

Corbyn’s hostility toward Israel led some anti-Semites, including former KKK leader David Duke and ex-BNP leader Nick Griffin, to praise him. The same David Duke, on the other hand, cannot stand Sanders. As he once tweeted, “Bernie Sanders isn’t White, he’s Jewish.”

It should be clear that the arguments made against Jeremy Corbyn – that he was at the very least insensitive to Jewish issues, and at worst, was an actual anti-Semite – cannot be made against Bernie Sanders. And yet – they will be.

The slanders have already begun. The right-wing Washington Examiner just wrote that “Bernie Sanders may be ethnically Jewish, but his campaign is rapidly turning out to be the most anti-Semitic in decades.” Another right-wing columnist asked, “Why is Bernie Sanders, an alleged social justice warrior, so comfortable with openly anti-Semitic activists … on his team?”

Sanders needs to face down these statements by deeds, not words. He’s made some good decisions in recent days, including the quick withdrawal of his endorsement for Cenk Uygur (of “Young Turks” fame), who is running for Congress. Among other things, including charges of sexism and homophobia, Uygur once invited David Duke onto his show to talk about Jews. The speed with which Sanders withdrew his support from Uygur is a good sign.

It would also help if the candidate would swiftly respond when his spokespeople, including Linda Sarsour and Ilhan Omar, make statements about Israel with which he does not agree. Sanders has not done so, and this provides an opening to his critics.

Bernie Sanders today has a very good chance to be elected as America’s first Jewish president. But to succeed in doing so, ironically, he has to be far more forceful in fighting against anti-Semitism than any of the other candidates.