Only three days after the death of Argentine prosecutor Alberto Nisman, the investigation of his murder (which it clearly was) has already descended into a tragic farce equal in its obvious corruption, dishonesty and incompetence to the the original probe of the 1994 bombing of the AMIA Jewish community center in Buenos Aires which killed 85 people. 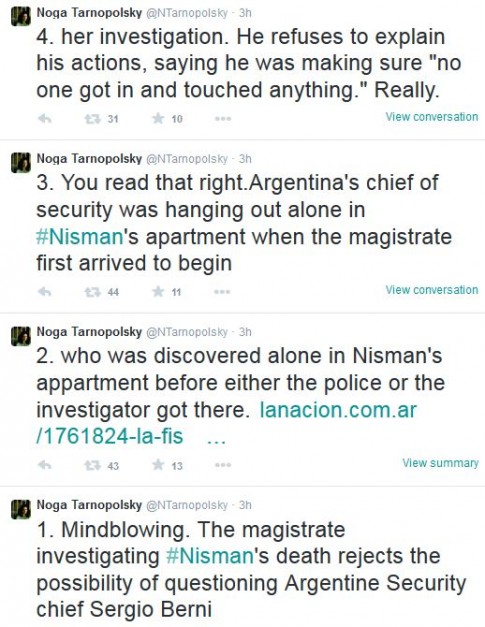 Nisman had turned up explosive evidence of a joint effort by the Argentine and Iranian regimes to cover up evidence of Iranian involvement in the bombing in return for oil from Iran.

Fortunately it appears that a large majority of Argentinians are not fooled:

70% of Argentines believe that the prosecutor Alberto Nisman was killed, of whom more than half believe the government was behind it, and 82% described as “credible” the complaint against President Cristina Fernandez for alleged coverup [of Iranian involvement], according to poll released today.

The study, conducted by Ipsos and published by the online portal Infobae, reveals that 70% of Argentines believe that the prosecutor was killed and 18% opted for suicide.

57% believe the government had a hand, while intelligence services are second, with 21% of respondents.