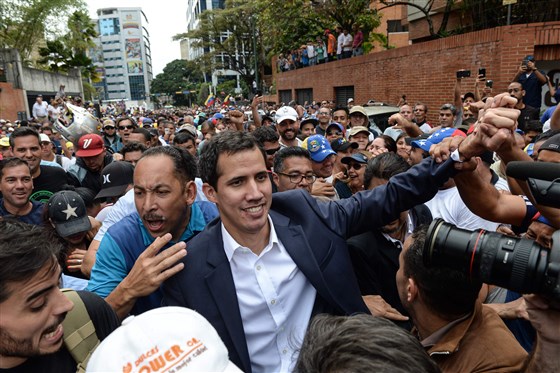 Thousands of Venezuelans took to the streets on Wednesday to confront Nicolás Maduro and the Western Hemisphere’s most wantonly destructive regime. A resurgent opposition — under the leadership of Juan Guaidó, the until-recently unknown 35-year-old leader of Congress and now the self-declared president of Venezuela — has mobilized its supporters to try to dislodge what’s now a no-doubts-about-it dictatorship.

“In its role as the only legitimate branch of government duly elected by the Venezuelan people, the National Assembly invoked the country’s constitution to declare Nicolas Maduro illegitimate, and the office of the presidency therefore vacant,” Trump said in a statement. “The people of Venezuela have courageously spoken out against Maduro and his regime and demanded freedom and the rule of law.”

…..
Venezuela has seen protests like these many times before, but this week’s are different. For years, such protests were concentrated in middle-class enclaves in Caracas and other big cities. Working-class people stayed well away from them, allowing the self-described socialist government to portray the protests as a kind of middle-class tantrum over lost privileges.

This week, though, nighttime protests lit up working-class areas throughout Caracas’s most reliably pro-government areas — while middle-class protest hot spots were quiet. An unusual inversion of the city’s protest geography is underway — though, again, not so unusual when you consider how many of yesteryear’s middle-class protesters have simply given up and left the country.

The protests this time around are different. No one in Venezuela is under any illusions about the government any longer. Its ghastly record of violence against dissidents is now firmly established, its absolute lack of scruples about what it will do to stay in power clear in every mind.

However any direct US intervention would be a terrible mistake– one that could easily backfire. And it would be good to see the US stand up as resolutely for democracy and against repression in several other countries.

Venezuelan blogger Daniel Duquenal reports that French TV has described the opposition leader Guaidó as “extreme right.” In fact he is a member of the Voluntad Popular party, whose previous leader Leopoldo Lopez is under house arrest.

Voluntad Popular is a social democratic party and a member of the Socialist International.